The weather had finally broken, so it was time to dust off the fishing tackle and trial a new fishing venue! I really enjoy fishing new venues; you don’t know what you will catch or how you will catch it. Today I had 2 options and the venue I was going to fish would be decided by a good old fashioned coin toss. Landing on Heads, I would be off to Water Meadows lake in North Perrott. The venue is ideal for me, as it is only 4 minutes car drive away. The venue itself isn’t well advertised so I called in advance to ask if it was OK to fish the lake as a member of the public. Fortunately it was, and it would cost a bargainous £6.


Arriving at the venue I was allowed in through a big mechanical gate, and before long I was unpacking the car and trying to discern which of the 2 lakes I was allowed to fish. After speaking to one of the owners I was told the lake in front of the cabins was the public lake and I could choose any peg I want. The lake behind this was part of a syndicate and only members could fish it. That being said, I carted my gear towards, and then over an electric fence (there is a slight mink problem) – a difficult task in massive waterproof trousers, and left my gear near a suitable peg and began a quick walk around the lake.

On my walk I saw a gutted Perch carcass of around 2 – 3lb (clearly the mink’s last meal). A few pegs away was the only other angler on the lake. A quick chat with him provided me with a species list of the lake. He was after some of the lake’s double figure carp, but there was a substantial head of silver fish, Perch, and apparently the lake had recently been stocked with hundreds of little Carplets.

With that in mind, I walked down the bank towards my peg and began setting up my pole. One of the reasons I chose this peg was because the electric fence was not immediately behind me. I didn’t fancy starting my first fishing trip of the year with a jolt! I had the choice of 3 swims, 2 of which had features. To my left, the swim had an overhanging tree, straight out in front was the obvious open water swim and to my right was a curved margin swim. I began shipping out to 9.5 meters at dead depth using a single red maggot, and began to feel the excitement of fishing a new venue. Feeding “double drop” (when you introduce 2 small handfuls of maggots one after another, the initial handful gets eaten on the drop, while the second handful sinks to the bottom), the float hadn’t long cocked when it zipped under the surface. I was into my first fish of 2014, a roach in great condition of around half a pound. Feeding small handfuls of maggots meant the bites were constant and before long I had a steady stream of Roach coming to the net.
After an hour of fishing my swim went quite, so I switched to a small cube of meat and shipped out under the overhanging tree to my left. For 20 minutes, despite feeding halibut fish pellets, maggots and casters I didn’t get a single bite. I was quite disappointed by this, especially as I had been told there was loads of small carp in the lake (somewhere). Switching back to my roach line, I hooked on double caster and shipped back out to 9.5 meters. The bites took a little longer but the quality of fish was evident. Double caster would pull in Roach all over the ½lb mark or more! These fish continued almost nonstop for the best part of 3 hours. Despite the weather being cold and windy, I would be confident in saying I had amassed a bag of fish over 20lbs. Occasionally the swim would go quiet, but a quick rig adjustment would either result in a slightly smaller fish or an opportunistic Perch, which had previously been munching the maggot loose feed. 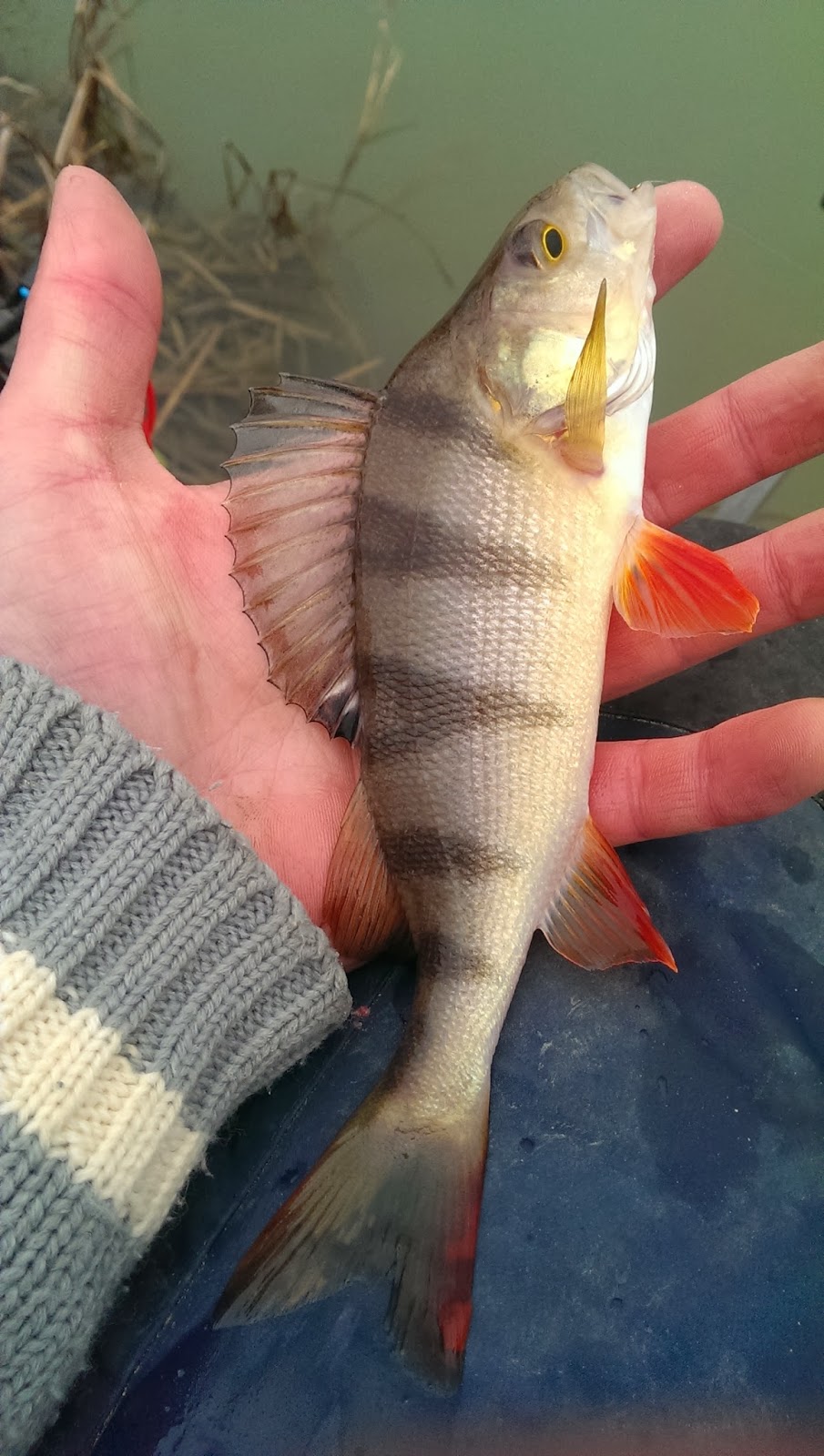 The wind was starting to pick up and after a quick sandwich break (delivered on bicycle by my other half), I decided to try out the margin swim on my right. Fishing double maggot on a top 3 meant I could fish to hand, and although I wasn’t using a keepnet, I quickly counted 30 perch or roach all between 3 and 5 ounces.

Switching to double caster yielded some surprising results, and I was surprised to see my 10 elastic come out of the top of my pole as I struck into an unknown fish. It was a perch, and a nice one, up over the 1lb mark! 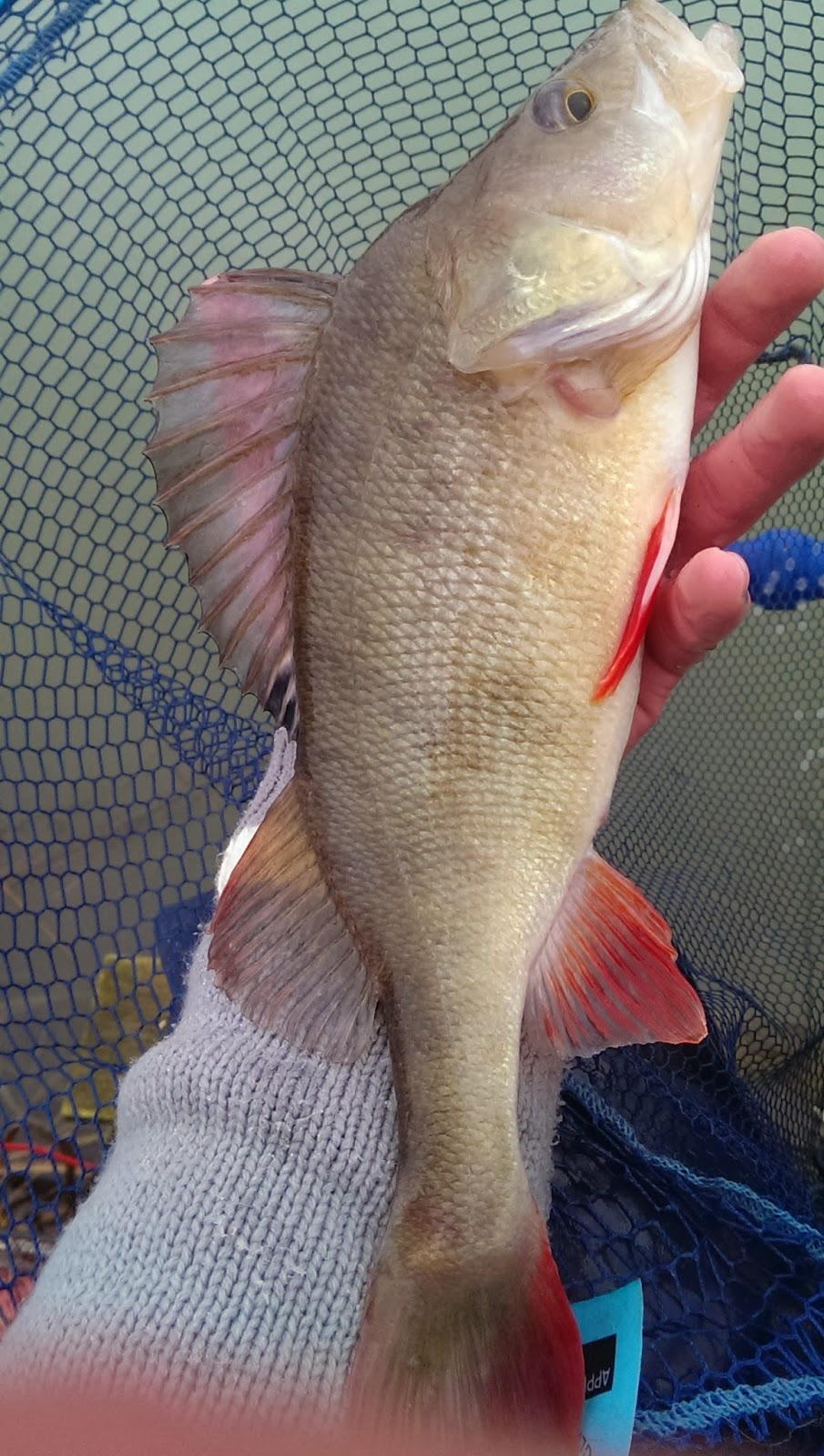 Feeding maggots again, but baiting up with casters (School boy error – I didn’t think to bring worms!), I flicked my rig back out and began waiting. This time a roach of around half a pound picked up the caster hookbait. Double caster seemed to always produce the better fish. Staying with the method for the last hour and half meant I caught 2 more nice Perch, the biggest of which was just under 2lbs, and countless others up to around a ½lb.

I was told that there are Perch of over 3lbs in the lake. That coupled with some double figured carp and a good standard sized Roach, meant this little 9 pegged fishery was proving to be a great find especially being so close to home.

Although I didn’t visit the reception, there were very few visible facilities on site. You may be able to buy a snack, but with such a small public lake I would be surprised if this was the case. The pegs were all very sturdy, although after the rain we have had they were also a tad slippery. The path around the lake was quite flat, but you wouldn’t be able to get a wheelchair to all the pegs. The slope of the banking on the one side of the lake would also prove difficult to anyone with difficulty walking. Despite my best efforts, I didn’t see a single carp that day, but one thing is for certain, with a lake that productive and so close, I will be making plenty of evening trips up there come the summer!
As a rating I would say;
Accessability *** – Parking is not an issue, hopping the electric fence could be problematic (although a gap can be opened if requested) and the path to and around the lake is not a consistent width, which means a sure footing is sometimes needed.
Fishability *** – The whole lake looks really fishy, the only problem is the best looking pegs (where I initially wanted to fish the pole), were very close to the electric fence. For that reason I stayed away.
Value for Money **** – £6 A great price for such a productive and secluded venue
Disabled Access ** ½ – As mentioned above, parking the car is fine, but the electric fence seemed easier to hop than to unhook, and from the rhythmical click it was making it is definitely turned on. That couple with the ground means wheelchair access would prove very difficult.
Share