Trip #92 – Wetter than an Otter’s Pocket

Just a short one this time. Following my last trip to Lyme Regis, I dug my waders out of retirement and was keen to get back out there in search of elusive bass. I check the tide times and it was going to be another early one. This isn’t necessarily a bad thing as Lyme Regis when busy is an absolute nightmare to park. I was up, out the door and on the road to Lyme as the sun was rising. Arrived at the Lyme Regis car park just after 6, only one Council van for company. Fortunately parking before a certain time is free, however after 8 it becomes very expensive very quickly. Looking through my wallet I realised I had enough change to see me through until 10 a.m. before needing sell all my worldly belongings to afford another hour. This was hopefully going to be a short but productive trip.

I got into my waders, set up my lure rod with a 14 cm Savage Gear panic prey and set off towards the ledges. Feeling rather smug wearing my waders I confidently walked down the walkway and straight into the water. This was my first mistake. Lesson 1 – If you’re going to wear waders you haven’t worn in about 2 years check they don’t leak first. I was about ankle deep in water when I first felt my feet get cold. At that point it wasn’t enough to make me stop and think “hang on are these leaking?” and I strolled on into the deeper water. By the time the water was up near my shins I was under no illusion that these waders were definitely compromised. 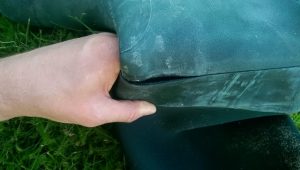 I waded out to one of the ledges which meant I was standing up off the gullies in the shallow water. I must have looked a bit daft, standing there laughing as I watched the water seeping out of my boots. I bent down I had a quick look at least state of the boot element of my waders. The seal between the welly and neoprene had completely perished, there was also additional splits along the sole of the welly and the bend of the foot. I was taking on more water than the Titanic! Needless to say fishing was not going well, and even the seagulls flying overhead seemed to be mocking me… Swines!
Standing on ledge, I cast the Panic Prey while trying to ignore the puddle of water sloshing around in my waders. I fished for around 15 minutes and had 1 follow before my feet became incredibly uncomfortable. The tide was on the turn, and a further 10 minutes meant I could feel my boots refilling with the flood of the tide. Today was not going well. I stepped off the ledge and down into a gully just below waist depth. There were several more holes which I hadn’t seen. I gave up fishing at this point and slumped back to the car . Unfortunately I had only fished for an hour and a half, but one silver lining was that it was still too early for the ticket machines! 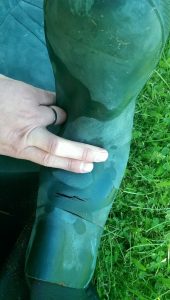 After peeling off my waders, I was pretty sure that I was carrying more water than was in Lyme Bay. I got into the car and decided that I would do away with my waders, sacrifice my trainers and wade through the bay at Charmouth to try and pick up a stray schooly. A 10 minute drive and I was parking up in Charmouth car park. Walking down the steps I swapped my lure to a sub-surface Ryobi and cast out. I was casting around the point of what I knew to be some submerged rock when I heard some splashing. I looked up and saw swimmers front crawling towards where I was casting. Fantastic…
I called it a (soggy) day then and there. Broken waders. Broken spirit. I turned back towards the shore and between me and the beach in no less than 1ft of water I saw a school bass chasing some fry. I laughed headed out of the surf and back to the car. What a couple of hours. I’ll have to revisit strategy before my next outing, as the water will be decidedly more cold over the coming months. Maybe waders can go on my Christmas list… for 2016.
Not rating as it was a terrible morning, and one which could have been avoided had i maintained my waders.
Share