I was recently asked to field test a new style of inline method feeder made by Yorkshire based Mosquito Angling called the Speedy Feeder. Having a look at them on their website, the design and concept was quite interesting and a new idea on me. I was naturally very interested in trying out this new style feeder. So when a package of them recently arrived I couldn’t wait to get out there and put them through their paces. 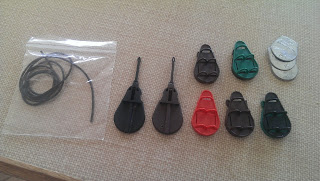 The concept behind the Speedy Feeder is that the Cartridge (of which they sent me 5) can be pre loaded with bait. Then, once retrieved from the previous cast, it can be quickly detached, changed and re cast, allowing minimal time between your bait leaving and re entering the water. The inline system also came with a number of different sized weight plates which are all interchangeable thanks to the sticky tack holding them in place. It is completely waterproof and does not lose its sticking power regardless of how many times you use and re-use it – I tried it.

The feeder can be used as a flat bottomed method feeder, but can also be used as a more traditional double sided method feeder, by sticking a “flat back” over the weight plate, this will allow you to ball your ground bait out en mass. It is also my understanding that there are cage and pellet feeder adaptations currently at prototype stage. The pellet feeder adaptation could prove lethal especially to match anglers who use the pellet feeder method on “bag up” carp venues.
The size of the feeder itself is marginally larger and more ovular than some of its competitors (mainly Preston Innovations which I currently use) and has a fixed plastic arm which houses both the first eye and start of the inline column. The base unit and cartridge could also be easily adapted to fit a “banjo” style feeder which would be also incredibly productive when fishing suicidal F1 carp lakes.
Concept into Practice.
I would be using the flat sided inline method feeder with the standard 25 gram weight plate. The business end would be a Drennan Super Specialist size 12 on 3 inch hair rig of 7lb Guru N-Gauge Fluorocarbon. Although changing the cartridges was easy (even with my duff hands) I did find threading the line through the central column a little tricky. It may have been easier if I had set up my rig before arriving on the bank. After a few minutes however, I had successfully threaded the line through the column and was attaching the swivel. I then encountered another little hitch. The column which your line fits through has no seat or stopping mechanism to stop the swivel from being pulled up inside the column (which may damage and shorten your hook length). This was easily countered however with a bead and securely tied stop knot. 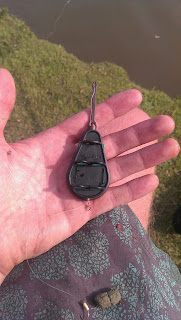 The business end.
As the area of lake I fishing was quite shallow was I didn’t use a lead core leader, but the feeder does have an eye which it could easily be attached too. Going forward I think I may try and tweak the workings of one of the feeders and elasticate or mechanise the central column allowing more give when striking into the fish. I may also use a needle point file to hollow out the column to allow silicone tubing to pass through the whole length of the feeder. 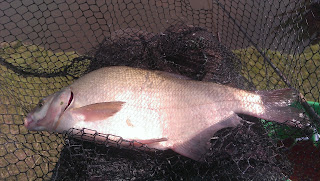 The Feeder delivered well, resulting in this nice Bream
On the hole I was very impressed with this method feeder and after watching the manufacturers’ video on their website it is clear that this idea has had a lot of thought and has come a long way in a relatively short period of time. The interchangeable cartridges were very easy to use, but they would definitely benefit from a feeder or cartridge mould so you set your perfectly shaped baits up in advance rather than moulding them by hand. The design of the feeder is such that it would work equally well with PVA bags and straps which could easily be tied either onto the cartridge or the frame itself, allowing you to chop and change a multitude of bait with the click of 2 very small and easy release buttons. This nifty bit of kit would be ideal for someone who is keen on feeder fishing and would easily be snapped up by everyone from the standard pleasure angler to the experienced match or carp angler. With a few small changes and one or two tweaks it would be difficult to see the feeder fall anywhere short of perfect.
Share