Moving back to Wales recently has meant I’ve had to reacquaint myself with the numerous fisheries that South Wales boasts, as well as the number of local Tackle shops. When previously living in South Wales I was a regular at Garry Evans, but with the first fishing trips in over a year on the horizon I need to have a quick re-supply of some essential bits and buy some bait. We decided to pick out what we needed on route to the venue (Hendre Park Lake) and stop off at Cliff Harvey’s Angling near Cilfynydd. 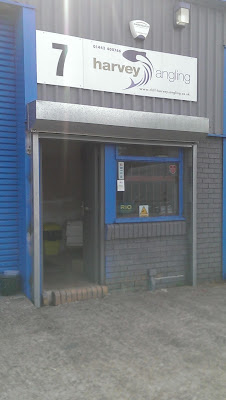 Not off the beaten track, but not in a conventional location, Cliff Harvey Angling is situated in an industrial estate and is quite large from the outside. On entering, the store is set out as a large square with the centre of room filled with an assortment of rods of all shapes and sizes (no poles on show), with all the walls dominated by rig bits, lines, hooks and the other usual fishing essentials. After a quick scan round and being re-directed to the “coarse fishing corner” I was slightly disappointed by the lack of equipment in general. There was a small selection of hooks and hooks to nylon, and basic rigs bits, but I found that the coarse section quickly became overlapped by carp fishing equipment. There was also a small selection of feeders and weights as well as some floats at various points along the walls.
There was a surprising amount of sea and fly fishing equipment (in comparison to coarse gear) with a few rods and reels on stands and in cabinets. There was also a reasonable selection of pike equipment with a myriad of spinners and lures which filled one of the walls. Although all the products were undoubtedly of good quality, the walls largely consisted of rig bits from manufacturers that I have not previously heard of. It was also clear that the company shifts a lot of gear through a mail order service, with high piles of boxes and bags of luggage and clothing on the second floor. That coupled with the slick website that boasts a lot more equipment than was actually visible on a store visit, might go some may in explaining the limited tackle selection on site at Cliff Harvey Angling.
There was very little in the way of advice from the sales assistant too. When asking us where we were going fishing he just looked on blankly and continued to tell us the maggot selection available was Red or White (no Bronze). The bait we did buy was of good quality, the maggots were fresh (big feed spots) and wriggly and the worms (debrobena’s) were healthy. There were no casters or pinkies which I found frustrating as I planned on fishing casters and worm to target the Bream later that day. On speaking to the chap behind the till, it’s not uncommon to be unable to get casters in this area at this time of year , which I found unusual as I thought that they are normally in ready supply. The bait however was very reasonably priced, with a pint and half of maggots and a pot of worms coming in at £6.25.
The shop in general would be able to cater for the very basic of angling requirements, and it would be worth stopping by to pick up bait at a cheaper price than some of the company’s more accessible competitors, but if its specialist advice you require or specific bits, perhaps ring to check availability before committing to the journey.
Store rating ***
Share