Friday night, conditions could not have been more perfect. The weather had been warm, the tide was rising (High tide was at 23:54), and the wind was low and settled. I’d done a lot of reading and decided to give Hive Beach (Burton Bradstock) a go. I knew that this beach was shallower than a lot of other beaches along Chesil, but that wasn’t an issue as my main aim this evening was to target Rays. I’d spent a fair while re-tying and tying new low laying rigs in the hope of maximising my chances. In my neck of the woods it’s incredibly difficult to get hold of crab, which would be my bait of choice, so I set off with Bluey, Squid and Sand eel, and aimed to catch something other than pouting or Dogfish. 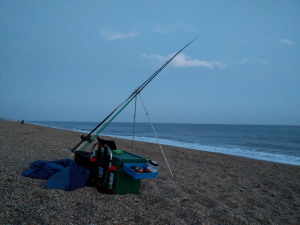 Difficult to believe this was gone 10pm.

I arrived at the beach feeling confident, and was surprised to see at least 15 other anglers up and down the shore. Some fishing to the west (right hand side of the café) which is generally considered the rough/snaggy area with the rest spread at 50 yard intervals heading East (the sandy bottom). I began the walk to an empty area of beach and was set up and fishing within 10 minutes. The first hour or so was filled with no bites at all, but the crabs we’re definitely out in force. Despite using a lot of elastic my hooks were coming back bare.

I was fishing my normal tactics of one close (40yards ish) and one as far as I could cast a bait. I’m coming to the conclusion that I cannot cast far enough, so may spend a few evenings working out how the pendulum cast effectively to be in with a better chance of catching. Towards the end of the second hour the half a bluey I was using in the gutter received a huge smash. I mean a proper tripod shaker. It was my fault; I should have had the ratchet on to let the fish take some line. I picked the rod up, stuck but by then the fish was well and truly gone. Winding in the bait looked completely pulverised, so I swapped rigs and began waiting again. I had noticed that about an hour before high tide the crabs seemed to stop feasting on my bait. 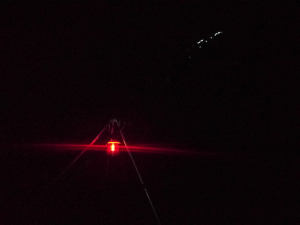 High tide came and went with no new bites. 00:30 arrived along with my second bite. Striking I could definitely feel a fish kicking a away. This fish was kicking away, and wasn’t the usual carrier bag fight of a dogfish. When the fish came close to the shore it really started to kick! As it was quite dark I couldn’t see the fish on the surface and began to think “What have I got here?” Answer. Dogfish. At least I didn’t blank. I unhooked the fish and back she went. This was the second bite on Bluey, so switched all future baits to bluey. I missed another bite in the 20 minutes that followed, and wound in another doggy at 1am. This bugger was deep hooked on a 4/0! I couldn’t even believe it fitted the bait in its mouth, so I snipped the hook length as deep as possible and released it. I decided to pack up around 1.30 having missed one more bite. 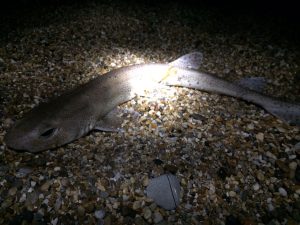 On my stroll back to the car I spoke with several other anglers about their nights. 2 of them had completely blanks, another had 1 (didn’t say what) and in the car park, another chap, asked “how I had got on?”, “Just 2 dogs mate”, he said “2 dogs and a pout” was his reply. I left the beach and got in just after 2am. To be honest I felt a little bit disheartened about the whole thing. As I said earlier the conditions we’re almost perfect, and I had read the rays and hounds were coming out. It much be for the lucky few. I think I could have caught more fish had I used worm baits, but as I was after Rays, fish baits are definitely the way to go. 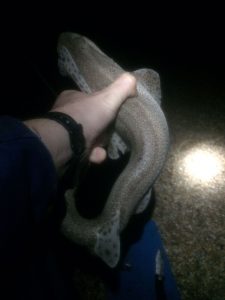 Before I go beachcasting again I think I’m going to work on my casting technique to try and nail down the pendulum casting motion. One of my issues is I almost always get an overrun towards the end of the cast. Also I really think I need to get more distance on my cast, but haven’t actually monitored how far I can cast – So I need to find a field. In the meantime, there are plenty of Mullet showing up along the south coast, so I may have bash for one of them!