After bringing some beachcasters and multipliers back from South Wales I’d decided to get out and give them a go. As I’d said previously, fishing in the day takes away from spending time with the little one, so a lot of my trips will be evening and on in to the night. Chesil beach is so vast, I had no idea where I would try my luck for this session. I had heard Seatown was throwing up some Plaice, but the previous days wind had meant the clarity in the water was reduced. A bit of toing and froing and I resolved to go to Abbottsbury. 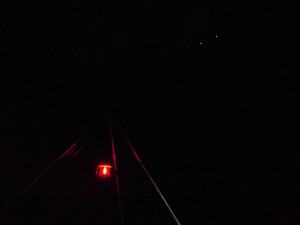 On the journey I sent my brother a message to ask for some advice “Head left and for the teeth!” – Rightio! Before arriving however I had to perform an unsuspected emergency stop in the mid of Abbottsbury village centre. A mallard! Standing in the middle of the road, refusing to move. I couldn’t really do much, but a quiet little beep to move it on resulted in an aggressive quack and a waddle off.

Anyway, I arrived in the car park and it was clear that this wasn’t going to be a quiet session with at least 20 cars parked up. I unpacked the car and walked up the slope to see A LOT of headlamps. My brother said, walk left and to the teeth “takes about 30 minutes”, so off I went. There is something incredibly unpleasant about walking on that beach. It’s hard, hard work. I’d liken it to walking on marbles. Writing this 2 days later, my legs and lower back still ache! Anyway! In 15 minute’s I’d passed the teeth and the shore line was still very busy. Another 5 minutes and I was a good 150m away from everyone, and now thoroughly sweaty!

I would be fishing 2 rods: one “in the gutter” and one as far as I could chuck it. I’d decided on a simple set up, of a pulley Pennell rig on the one and a 3 hook clip down on the other. My baits consisted of Sand Eels, Mackerel, Ragworm and Squid, and I would be alternating between large baits and combinations baits on the pulley, with the clip down mainly using ragworm. I started fishing at roughly 9:15pm and had my first bite at 9.20 on double Sandeel. A sold knock on the rod and I wound in a dogfish! 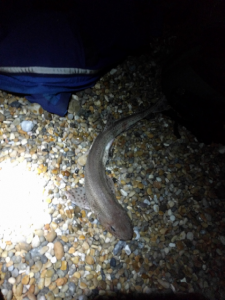 “Yes! Saved from the blank!” I thought, now to aim for a few more and then on to something else. I try to always approach fishing as though it’s a match, or at least try to be as prepared as possible. So I would have 2 rigs baited and ready to go (well that was the aim…). I swapped rigs and slung out a side of mackerel again around 40/50 yards. No sooner had I placed the rod back on the tripod that my other rod was nodding away. Winding down I connected with something! Another Dogfish.

Back it went, and re-baiting my clip down I cast back out, placing the rod back on the tripod. Now the other rod was going! Striking I could feel the sluggish weight of what was another dogfish.

Winding in a dogfish is the sea fishing equivalent of winding in a large Bream, but with less fight. It’s like winding in a carrier bag. Back went the fish and now the clip down rod is going off! Winding this in, it felt slightly better and there was definitely something kicking away. It’s was Dogfish on the top hook and a small pouting on the bottom hook. Double header – Result! (Sadly my phone decided that using the camera wasn’t an option so, no more photos were taken at the beach!) At this point I now had no rods in the water and I hadn’t had chance to bait up additional rigs. I was contemplating using the Pouting as bait when the dogfish I was holding wrapped up around my hand and scraped off a few layers of skin. This was totally my fault for not concentrating on the little blighter, losing my train of thought both fish were returned before I knew what I had done! Bums! 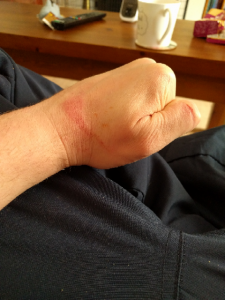 I re-baited both rigs before casting them both out and hoped it would give me enough time to rebait my spare rigs. This time an attempted pendulum cast in the dark resulted in a crack off! Brilliant… Note to self – Find a field and practice casting…

I re-attached a new leader with a spider’s hitch knot, clipped up the second rig, again baited with Ragworm and out it went (sticking with the lob cast for safety). I spent the next few minutes knocking together a quick Pulley rig as there was no way I could have managed a clipdown on the beach in the dark! This was baited with 2 baby squid. Both rods would take it in turns to go over, but this fishing was absolutely non-stop and I completely lost count of the numbers of cups of tea I knocked over getting up to strike a bite. It reminded me of coarse fishing when you can’t get through a school of small Roach, to the bigger fish. I’d already accepted that I was going to spend a few sessions working on my casting, baiting up rigs and various other things so I could get to grips with shore fishing. But to be honest, after dog fish numbers 12 and 13 (another double header) it was getting slightly mind numbing. Still at least I was catching and wasn’t getting bothered by crabs! The rod in the gutter was slightly quieter than the distance rod, but currently baited with a fillet of mackerel and rag combo the rod racked over with 3 good knocks. Striking I felt something for a second (maybe not even that) then slack and wound in 2 completely clean hooks. I have absolutely no idea how that happened, but was a bit frustrated I’d missed a fish which may or have not been a dogfish.

I cast out reset my lines and within 8 minutes I was in to another muttfish. I fished for another hour taking me up to 12:45 a started to call it a night. I wound it up on 19 dogfish and 1 pouting. I would say that the fish baits resulted in more dog fish than worm, but it was a fairly even split. So, what did I learn?

Fishability – **** Chesil look screams fish, it doesn’t matter what time of year, there are so many unknowns. You just don’t know what you may catch and no 2 sessions will ever be the same.
Accessibility – **** Access to Abbottsbury is easy and you can park in the car park at the beach. The walk as I said above, is not fun. The constantly moving shingle means you don’t walk very quickly which is very tiring.

Value for Money – **** By the time I got there the parking attendant was gone, and I left in the middle of the night, so he still wasn’t around. I’m not sure how much it is in the day though.
Disabled Access – None. You simply couldn’t push a wheelchair on those shingles.

As a side note, be careful driving away from Abbottsbury especially at night, this area is so wildlife heavy that on the drive home I very nearly took out Bambi’s mother. She would have quite simply written off the car. She was MASSIVE. Fortunately I saw her and slowed down enough that after a few beeps she came out of her headlight bedazzlement and bounced straight over the roadside hedge. Further down a different road I encountered Bambi, who ran down the road for about 250m until he jumped over a field gate. Anyway, until next time!
Share