Another year has come and gone and coupled with a very busy Christmas and a mystery stomach bug over the New Year meant that my extensive fishing plans for the festive break were reduced to 1 trip sea fishing. Still, I couldn’t complain as it was set to be lovely day out with my brother and grandfather. We decided to pick a fairly easy venue and opted for Cold Knap near Barry. Admittedly we should have looked a bit further afield if we wanted better catches, but hearing good reports of whiting and codling from across the Welsh coastline meant we felt quite optimistic heading out. Arriving at the beach, the walk down to the sea front was a short one, although the pebbles didn’t prove overly comfortable underfoot. 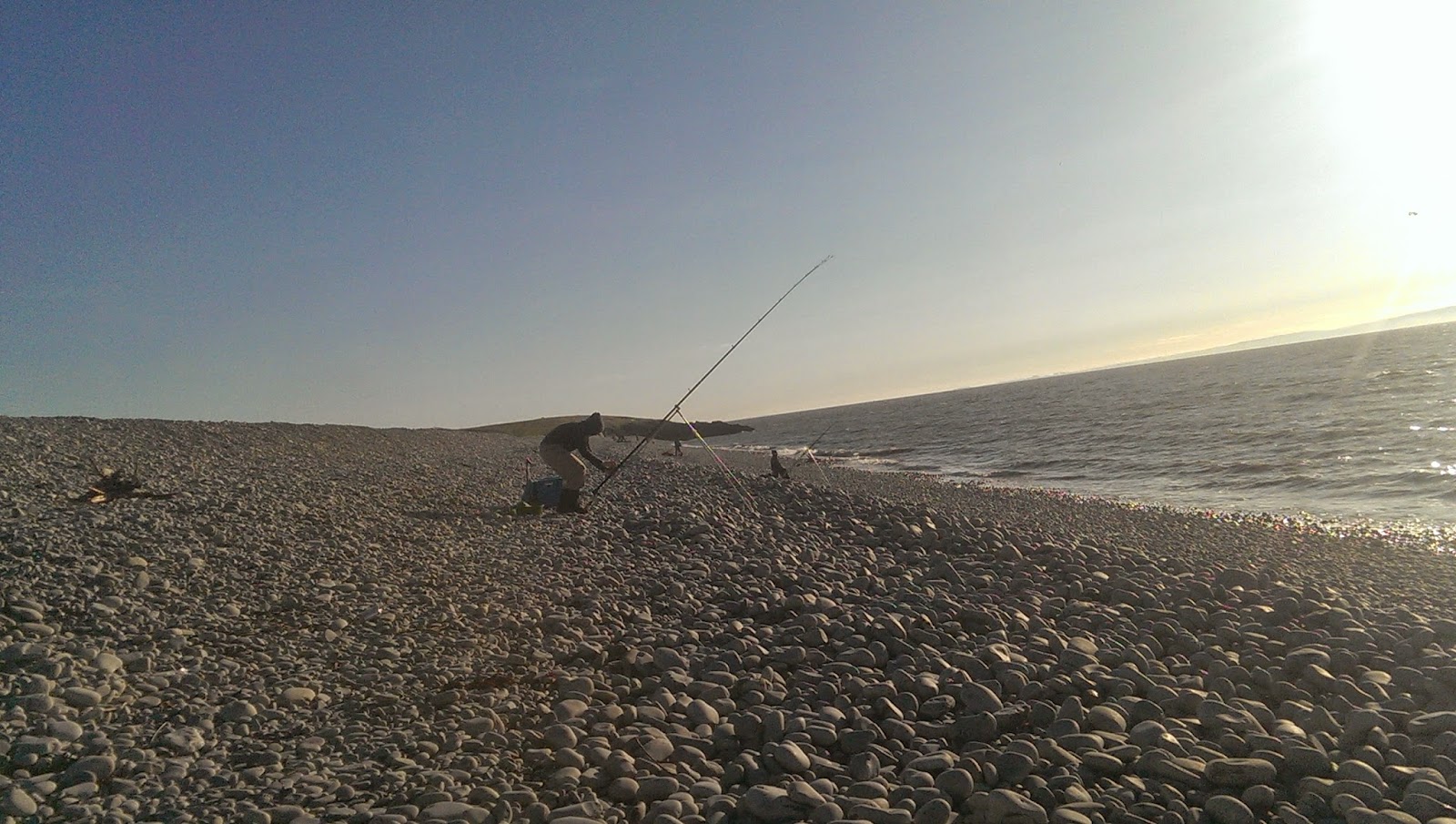 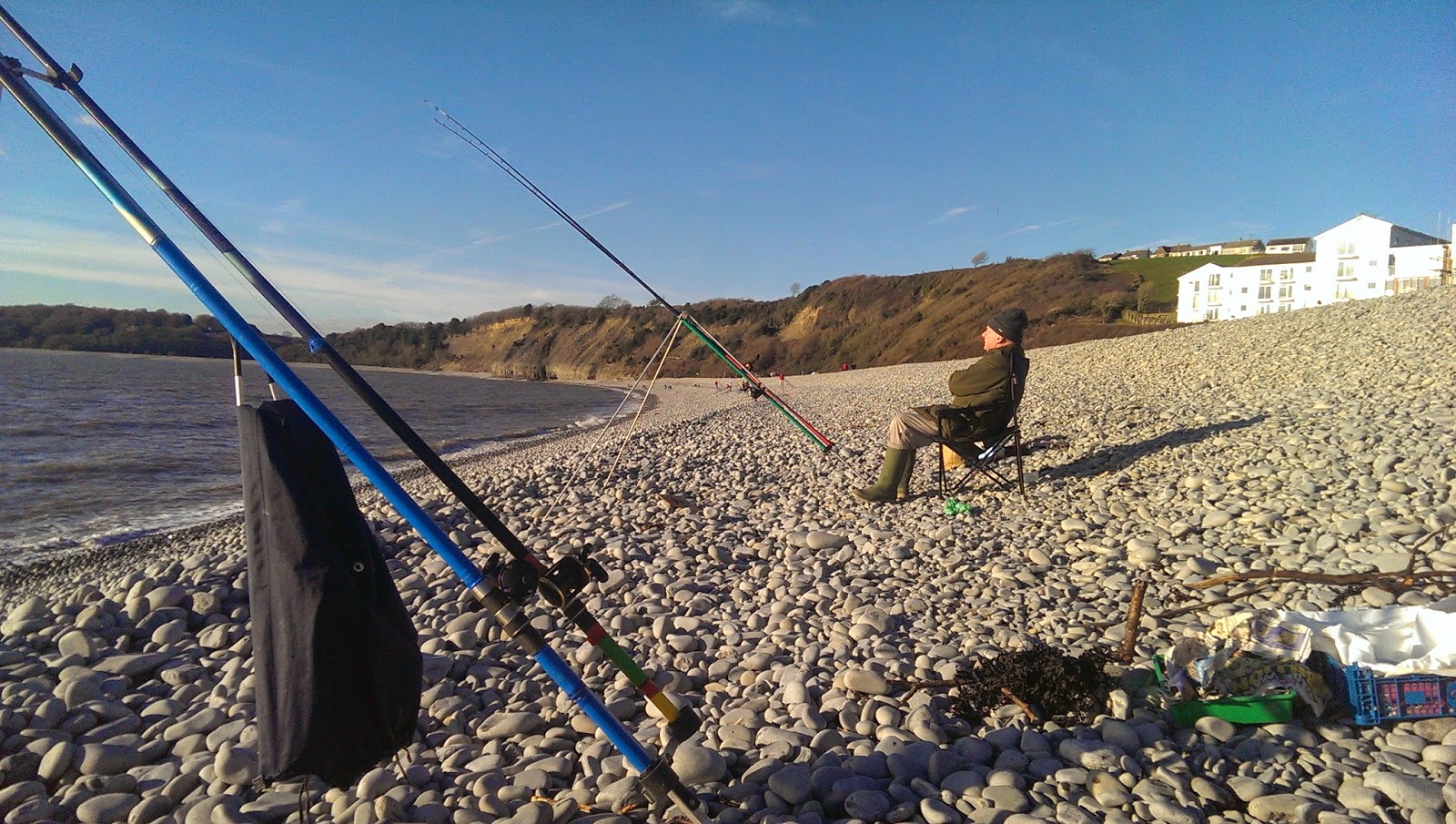 I would be fishing in between my brother and grandfather and with an array of bait we hoped the fish were hungry. The gear I used was;

I intended on fishing a 3 hook clip down on the one rod with a pulley style pennell rig on the other (aiming for something slightly bigger). Hooking up a ragworm and lugworm combination I cast out both rods and began the waiting game. We had decided to fish the flood tide, and it wasn’t long before we were pulling our gear up the beach to avoid it becoming water logged. I was very surprised to see how busy the beach was, after 45 minutes of fishing we were 3 of 20+ anglers on the beach all looking for a few fish. My gramp was the first to get a bite, and after another 10 minutes waiting, he wound in a small pouting. He wasted no time in informing us that the score was now 1-0-0. At 72 he is still quite competitive… Apart from that bite, we waited another 30 – 45 minutes before the next proper one. I say proper bite, I mean, bite from a fish. Despite the time of year, if we left our baits out for any longer than 15 minutes, the hooks would be stripped bare by the resident crabs.

My brother had a cracking bite using mackerel, but missed the strike. As it was a slow day and this was the first bite in some time I decided to switch from worm baits to fish. On winding in the pulley rig I noticed that I had somehow hooked a crab! Did that technically mean it was 1-1-0? 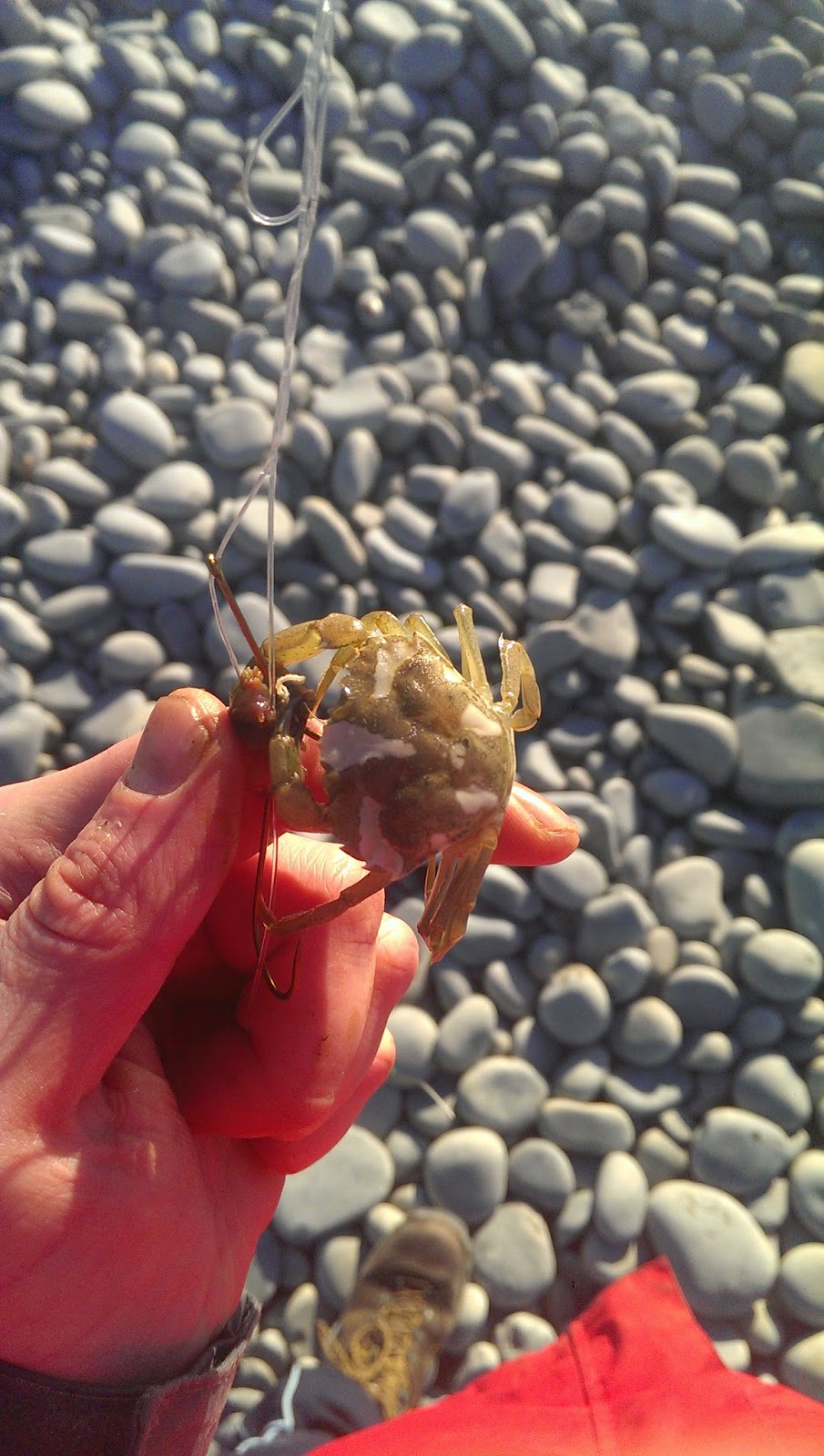 I threw the crab back in and swapped rigs. I switched to using half a fillet of mackerel whipped on to a Pulley pennell rig, and cast out. Within 5 minutes my rod was registering my first proper bite of the day. I gave it another minute before winding in, but on picking up the rod and striking I could tell I was bring in more than just the 6 ounce lead I had cast out. It was a lovely whiting up over 1lb, closer to 1 1/2lb. Under other circumstances I would have kept the whiting as they taste quite nice when battered, but I released the fish, re-baited and re-cast hoping for another. 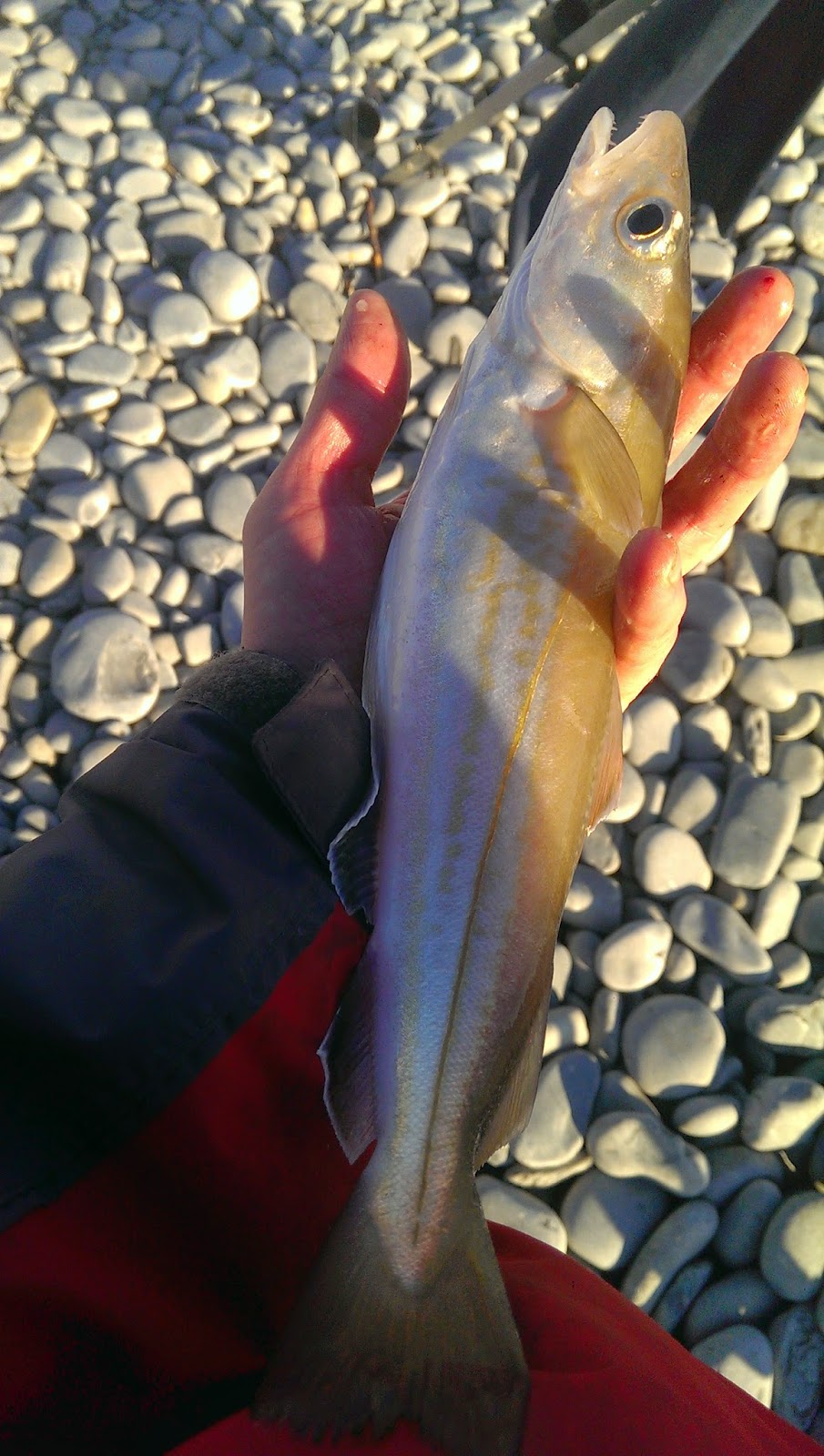 The next fish also fell to a mackerel bait on my brother’s rod. Another whiting (smaller than mine I might add), I was relieved that we had all caught fish. The tide was well on its way to turning by now and looking up the beach, it seemed as though those anglers who hadn’t caught were already packing up. We decided to fish for another hour, but the tide was dropping quite quickly so our casting frequency increased further, to keep our baits away from the retreating tideline. 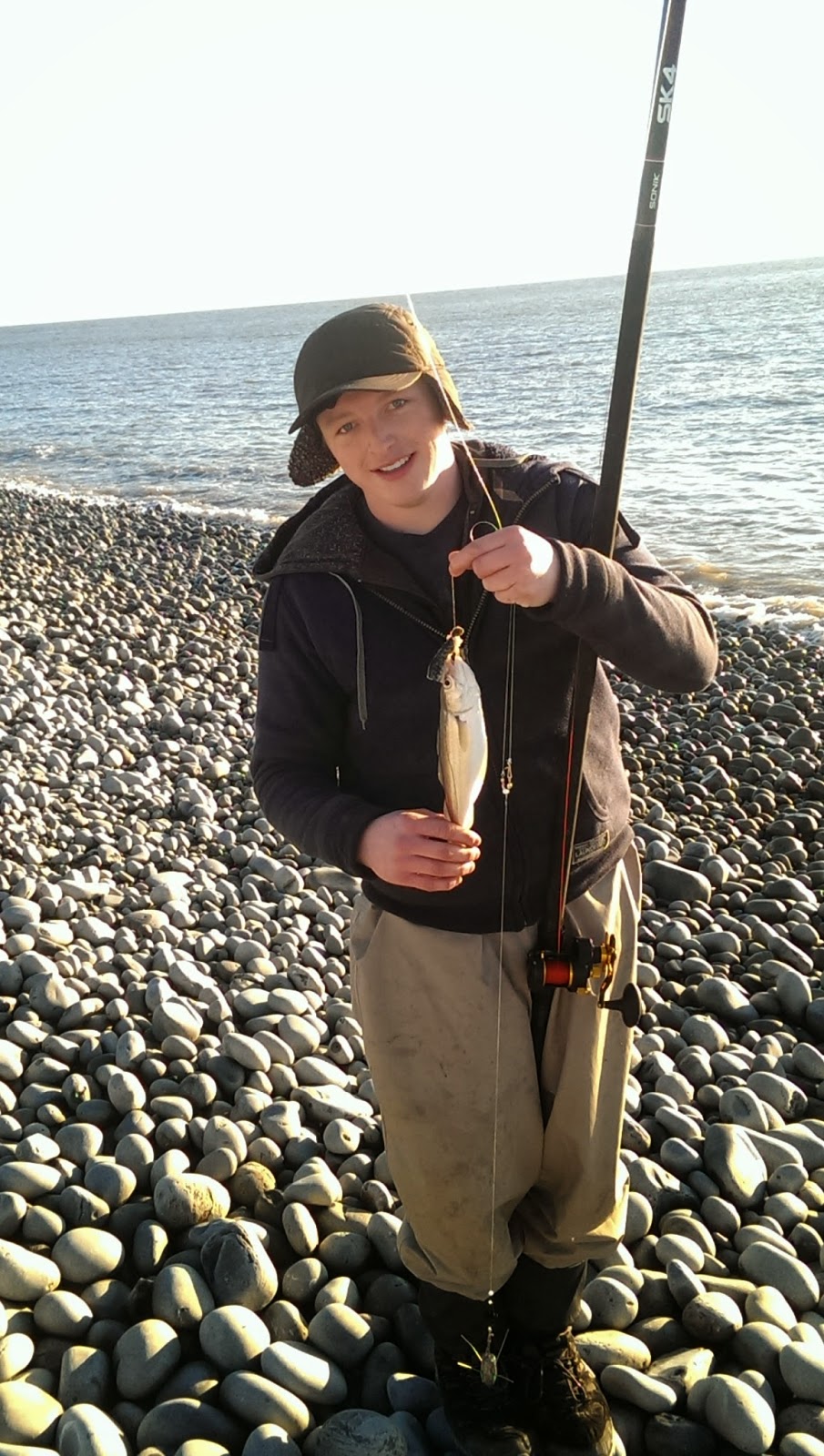 It was 15:15 when we decided to call it a day, and despite the (fish only) finishing score being 1-1-1 it was a thoroughly enjoyable day on the beach. In hindsight we should have fished using mackerel baits from the beginning, I think we would have caught a few more fish, but worm generally produces quite well on this beach. The parking was ideal being only 30 yards away from the waterfront, and with the use of public toilets. There was also sandwich van selling hot food and drinks, which would have been very useful, had we not been provided with 3 bags full of food, courtesy of Nan. The pebbles are large and uneven making walking down the beach slightly difficult, especially if you are unsteady on your feet. But apart from the occasional move the fishing (once settled) was quite comfortable. On bigger tides it may even be possible to fish straight off the top, providing you can cast far enough.
As a rating I would say;
Accessibility – ****
Fishability – ***
Value for Money – ***** (Fishing in the sea is free, and so was the parking)
Disabled Access – ** – You would not be able to get wheelchair on to the pebble. Cardiff bay barrage and Penarth pier offer great alternatives and you can fish right to water, without worrying what the tide is doing.
Share