The problem I have is, that although my almost surrounded by large fields, the vast majority of them have rather hefty power lines in/going through them. That is a definite NO NO. So I needed to go on a bit of a mission to find a suitable sized field without power lines and enough space so that in the eventuality that I actual get a decent cast eventually, I will have about 150+ meters to play around with.

If I come close to 150 meters I would be absolutely over the moon, so this distance is ample.

Now I don’t have a measuring wheel, long distance measuring tape etc, so I needed to get on Google and find a field without power lines, but with enough space to chuck a lead, or, in this cast, a ball. A few dog walks later and after several strange looks pacing up a down several fields with a dog looking at me just as bizarrely as other walkers I think I found one.

Google has told me 2 distances of roughly similar values so it must be near enough to what I require. 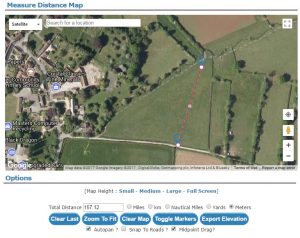 I haven’t marked out 50 or 25 meter intervals yet, but I will as soon as I find some suitable and disposable markers. I just hope they don’t get moved by concerned dog owners.