How to connect and disconnect your line to a Dacron Connector. Double loop method.

In keeping with my most recent post about which connector is better, a standard Elastic connector or Dacron connector, I hit another snag when finding out how best to attach your rig to the Dacron! A crucial point where catching fish is concerned… Unlike a standard connector where you physically clip the loop of the rig into the connector, line can be attached to a Dacron connector in a number of different ways.
I read that one angler makes his rigs extra long and ties them on, cutting them off at the end of every session. Another angler attached them by a loop but then cuts the loop at the end of the session because untying the loop is too “fiddly”. This seemed far too time consuming, especially for match anglers who on the whole, prefer Dacron connectors when fishing the pole. An internet search wasn’t much help either, with all anglers trying to argue for their favourite knot, loop, connector and brand. As I would be using a home-made Dacron loop, I started along the route of trial, error and cups of tea (a very important part of trial and error), before I arrived at something I have taken to calling the “Double loop” method.
This method attaches your rig to the Dacron quickly and securely, but it also allows for the rigs removal (if snapped etc) with a slight pull on the secondary loop. 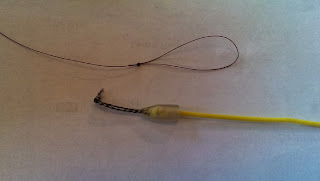 1. When making the initial loop at the top of your rig, ensure that the tied loop is between 1 and 2 inches long. 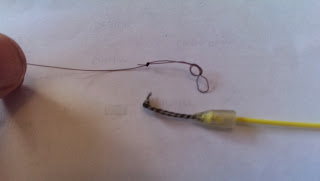 2. Then taking the loop you have tied, tie another smaller loop in the existing loop. 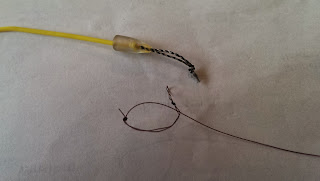 3. Taking the initial loop, pass the mainline through it (between the initial knot and second loop), forming a hoop which is tightened by gently pulling on your mainline. 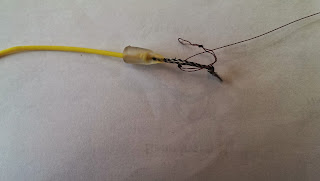 4. Pass the Dacron connector through the hoop. 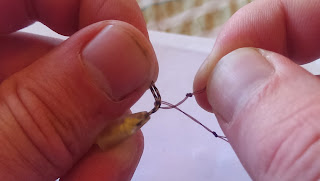 5. Holding the knotted end of the Dacron connector, so that the loop does not slip off before being properly connected, gently pull your mainline, tightening the loop around the Dacron. 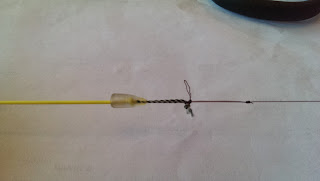 6. If tied correctly, once tightened your rig will be very securely looped against the Dacron. Also the second loop should stick out away from the join between the monofilament and Dacron. 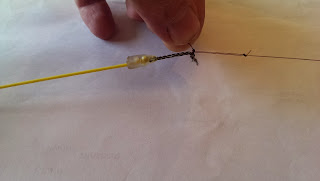 7. To quickly and efficiently remove your rig from this connector, pull the second loop (sticking out) slackening the tightened loop. 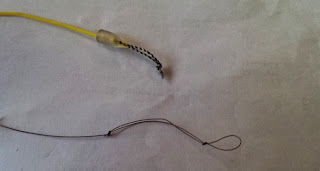 8. You can now change rigs/pack away without having to untie or cut any tied rig line.
Apologies about the state and shape of the monofilament I have used in these photos. Knots were tied, untied and re-tied before I had something consistently strong and reliable.
Results on which type of connector is better are still to follow.
Share