The Netting of a Local Pond

A few weeks ago I received an invite from Pete Turner, an Environment Agency officer asking if I would like to watch a local pond being netted for fish. I thought I would be foolish not to. The lake in question is a natural fishery in Cookridge, currently under ownership of the BT Leeds Angling Club (unfortunately although I have been given permission to write about the day I have been asked not to name the lake specifically in this post). Having never fished this particular water I was keen to know what fish the lake held after recent speculation that the lake was frequently visited by the dreaded Goosander! 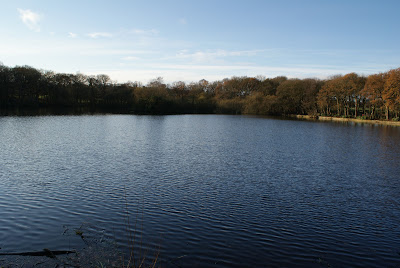 It was a great opportunity to get involved and learn a bit more about what the EA does for us anglers. Meeting Pete and the lakes local bailiff Chris Parkin, I asked what the purpose of today’s netting exercise was. Aside from forming part of the Fisheries Management syllabus at Bishop Burton college’s (they would be doing the netting) it was to answer the angling clubs fears about a decline in the numbers of silver fish being caught. Also if a number of fish were caught, to determine their growth rates and health from taking various scale samples. The students arrived and we all made our way to the lake. Before long their brave teacher was donning a dry suit and hopping into the chest high water straightening out their net before the first pull of the net was made. Before long, the pupils and teacher were laying the net (with the aid of their boat) in a large horse shoe shape and slowly began to pull both sides, hoping that they had caught millions of fish which could then be studied and surveyed. 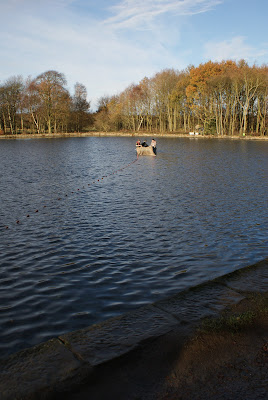 The first draw of the net was unsuccessful and after 10 – 15 minutes the net was back out and being repositioned, eventually being pulled into a tight horseshoe on the dam end of the lake. The net yield was two tinca’s (Tench) and a juvenile Sergeant (Perch). The Tench were impressive specimens with one weighing easily up to 5lb’s and the other around 2 – 3lb. The Perch in comparison was tiny, and because of the low levels of fish no surveys were taken and the fish were released quickly and carefully back into the lake. 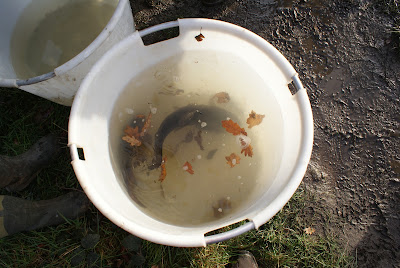 On asking the bailiff about the Tench he informed me that the larger of the 2 was around the average size for this lake, which would be an exciting prospect for all BT Leeds Angling club members. Because of the poor netting results the net was then recast on the side of the lake and this time the net pulled in a another lonely perch. It wasn’t looking good. The fact that it was also a bitterly cold and windy day meant that my limbs were slowly going numb and I was wearing considerably more clothes than some of the guys pulling in the net! 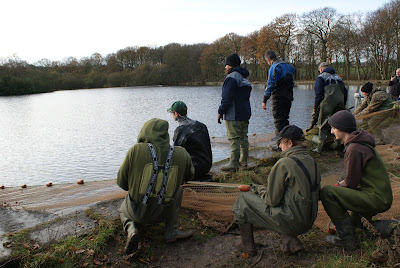 The last pull of the net brought in another perch, which was the largest of the day weighing in at roughly 5 ounces, but this was quickly released and the net and boat were put back onto the trailer in double quick time with everyone keen to get out of the freezing cold. The college students quickly filed on to their mini bus and before long there were making their way home. I decided to ask Pete what the next course of action would be for the lake. Because of the threat of Goosanders artificial fish refuges (floating islands etc) were one option along with “Hawk Eyes” which replicate the head and eyes of a bird of prey. These are now to be considered by the angling club as well replenishing the low fish stocks with a head of silver fish. I also asked about recent work completed by the EA and how the licences are policed in the area. I was told in no uncertain terms that anyone caught without a valid EA rod license will receive a court summons and well as having their equipment confiscated, with the penalties for those caught poaching being very severe. So it goes without saying how important it is to purchase a new rod license at the beginning of every season. He also informed me that in response to angler’s questions and queries, a number of threads have been set up on the YorksFishings ProBoards website where you can communicate with EA officers directly as well as through twitter.
It was an enjoyable experience watching the picturesque lake being netted for its contents and although it was slightly disappointing that only a few fish were caught, it was interesting to speak to an EA Official  and find out a little more about what they do to make our lakes, rivers and canals a better place to fish. I’m hoping to be involved with more EA tasks in the future and will keep you posted on what turns up!
The EA article regarding this event can be found here.
Share