The EA in action!

I’ve lived in Leeds for just under 2 years now and since I have been here there has a huge build up of rubbish gathering behind a disused bridge off Milford Place. I’ve tweeted about it several times previously but nothing to my knowledge had been done about it. The mass of broken trees, rubbish and other debris that the river pushed underneath the bridge was made considerably larger by the torrential rain and storms Yorkshire experienced around the New Year. After checking on the build up recently it was getting perilously close to being a potential flood hazard, so, on meeting with an EA official I decided to visit this section of the river to discuss what, if anything could be done about it.

You can imagine my surprise when we arrived at the river to find 5 of the Environment Agency Op’s Team suited and booted in chest waders and life jackets setting to work on the dead mass of foliage with a Tractor’s winch, chainsaws, rope and chains. They certainly had their work cut out for them as there must be a few ton of dead logs to cut through, but it was also reassuring to see the EA in action, especially after receiving some quite harsh press from the main angling tabloids. It was clear that this would be more than a day’s work and the removal of all this mess might spill over into next week but as the official told me, removing this build up should have a positive impact on the stretch of river immediately below it.

The increased water flow will wash through the silt build up on the gravel beds below the bridge making them a more suitable and viable spawning ground for the newly reintroduced Barbel which have been consistently stocked into the river over the past few years This will also create a spawning ground for the already established head of Chub which populate the river. 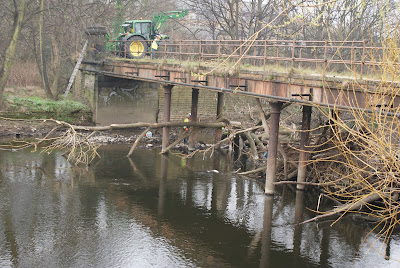 The hour or so that we stood by the river bank we discussed many of the issues which have been highlighted by both national press and concerned anglers. It seems as though the EA have big plans for 2012 along with the help of the Angling Trust. After recently sending out a call for any issues anglers wanted to ask I received an influx of questions and queries from concerned anglers to put to this official. As a number of these were fairly broad and encompassed a large area, some even National I gave him a list of the most common questions. I am hoping to receive answers to some of these queries in the next few weeks. Any developments on this point will be written up and blogged as soon as I receive any answers.

However, for the time being it was very refreshing to see that after expressing concerns about that section of river, the task was in hand and the clear up was underway. It also provided me with some reassurance that the recent changes made within the Environment Agency have made it easier for anglers to communicate with them about any queries they may have.