Having an afternoon spare meant that I was able to get out of the house and down to the canal for a few hours sport chasing an elusive Pike. Being cold it also meant that I could give my new Avanti Cyclotherm suit an outing in the hope of keeping warm and dry.

Heading to the canal just after 2pm I walked towards Kirkstall Marina at the end of Redcote Lane. Arriving at the canal a pair of Goosander’s were lazily paddling up and down the stretch of water as a Kingfisher perched in a tree above. This seemed an ominous start. Still, being optimistic they wouldn’t be here if there were no fish to catch. I walked down the bank for another 100 yards when I decided to start fishing. Baiting up with a small Smelt I cast out and began the waiting game.

Sitting down I became aware of 2 things, firstly how incredibly warm my suit had kept me (it was 1°C) and secondly how restrictive it was. It seemed as though the sacrifice of being warm was made at the cost of being able to be fully mobile. Never-the-less I was warm and to improve matters my float had begun to duck up and down on the surface. 5 minutes followed and my float was now stationary, reeling in I saw the tell tale signs on bite marks on the tail of the small fish bait. Rebaiting with a new Smelt I recast but after 15 minutes of inactivity I wound in and moved along the path towards a semi sunken barge near Armley Mills.
Settling down and casting out towards the dying reeds on the opposite bank the onset of darkness meant I didn’t have much time left to catch a fish. One of the local anglers was walking up the tow path at this point and stopped to ask how my session was going. As soon we had begun talking my float started zigzagging around on the surface before burying under the water. Striking I could feel the fish kicking away, but winding it in was an easy task and the jack Pike which took my Smelt couldn’t have been over 2½lbs. Still I was pleased to break my fishing duck of 2012 with a species I had yet to catch since re-locating to Leeds; it also gave me hope that there were Pike to be caught from the canal. 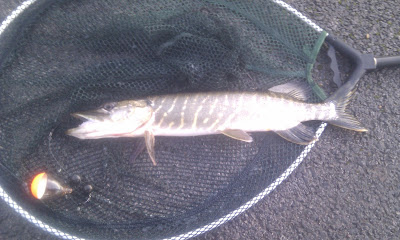 The light was quickly fading now so returning the fish I packed up my gear and I made my way back home. Hopefully after a prolonged cold spell it will make the bigger ones more inclined to go on the feed and if they do I will be there to catch them!
AvantiCyclotherm Suit – A decision and review will be given after a more thorough test!
Share