The recent flooding and it’s cost

Moving steadily on the from a balmy autumn to a (until recently) mild winter has left the water levels in many of the UK rivers and Lakes precariously low. So the recent storms offered the rivers and lakes a chance to take on some of the water which they may have lost over the summer and autumn months. At the time, the Environment Agency and MetOffice released flood warnings on all rivers in and around Yorkshire. So now the river is back to its usual level I went for a short walk to my nearest nature reserve (Kirkstall Valley Nature Reserve) to see if the recent flooding had an impact bank side. 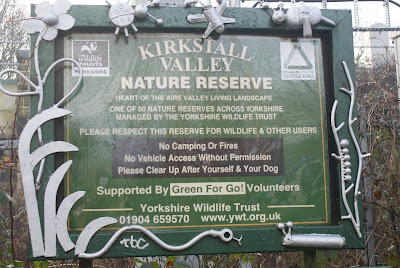 After tweeting the Yorkshire Wildlife Trust about the current situation around the weir I decided that it would be better to provide a more in depth account of this local nature Reserve, which is very frequently visited by walkers and nature lovers alike. Looking over the bridge at Redcote Lane I could instantly see a lot of foliage and various logs and rubbish which the river had churned up and pushed through along both river banks. Having fished the river several times I am under no illusion that it can be a particularly hard river to fish. It has been described as “full of fish” but very “peggy” by a number of local anglers as well as an Environment Agency official. I have also lost (although not recently) some tackle to the river in past fishing trips, and have come to the conclusion that the river is just very snaggy (an issue highlighted by my previous blog post Time for a cleanup). Approaching the first weir in the Nature reserve I could see that this river was notoriously tricky. 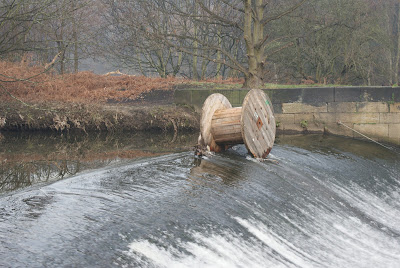 An enormous wooden spool has become fixed and is upright at the beginning of the weir pool, but this is only the start. I can only assume that during the recent floods the water at the weir pool formed such a size that the fallen trees and logs which the river had begun pushing through, became caught up behind the trees growing out through the weir pool walls. If this is became caught, what on earth was flushed further down or, (more likely once the river levels had subsided) what has sunk back down to the bottom? 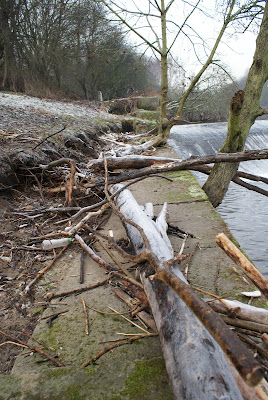 As you can see the river must have swept up and over the banking leaving varying amounts of rubbish and dead foliage high up along the river bank. I was amazed how much had been washed up onto the banks and it was now easy to see why the river claimed so much equipment from anglers. Walking over to the small island, the severe winds Yorkshire has recently experienced with have also resulted in some tree casualties. 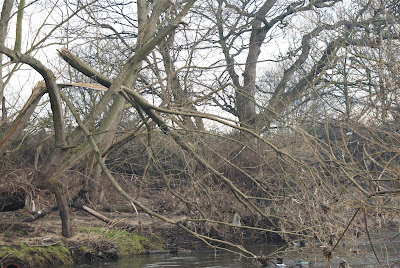 I am concerned about how long it will be before they find themselves in the river, which would more than likely cause problems further down the water course. A fairly substantial dam has already formed at the disused bridge at the end of Milford Place just off Kirkstall Road.

Hopefully this brief post will not simply pass by the officials, who are responsible for these areas. Over the coming months I am sure that I am not the only one who would like to see this detritus removed so that people can start visiting the reserve and the river bank again so that they can be enjoyed as they should be.