The recent bank holiday meant I had was able to get out and wet a line and with some solid bags of silver fish coming out, along with big Chub and Bream I decided to head up to my local club water of Dillington Pond, targeting the latter. After reading Jamie Rich’s blog I knew the bigger fish were on the feed and I just hoped they wouldn’t be to pre-occupied spawning so that I could catch a few. I had planned on getting up to the lake early, to avoid missing out on my desired peg, but the local scrumpy I had drunk the night before prevented me from getting out much before 10. I had a quick walk around and found that the peg I wanted was taken by a chap called Scott. He was absolutely bagging up on silver fish, fishing mid-water on caster. I asked his advice and decided to fish peg 16, a great but challenging looking peg, one of only a few with a feature in the shape of a big willow tree. 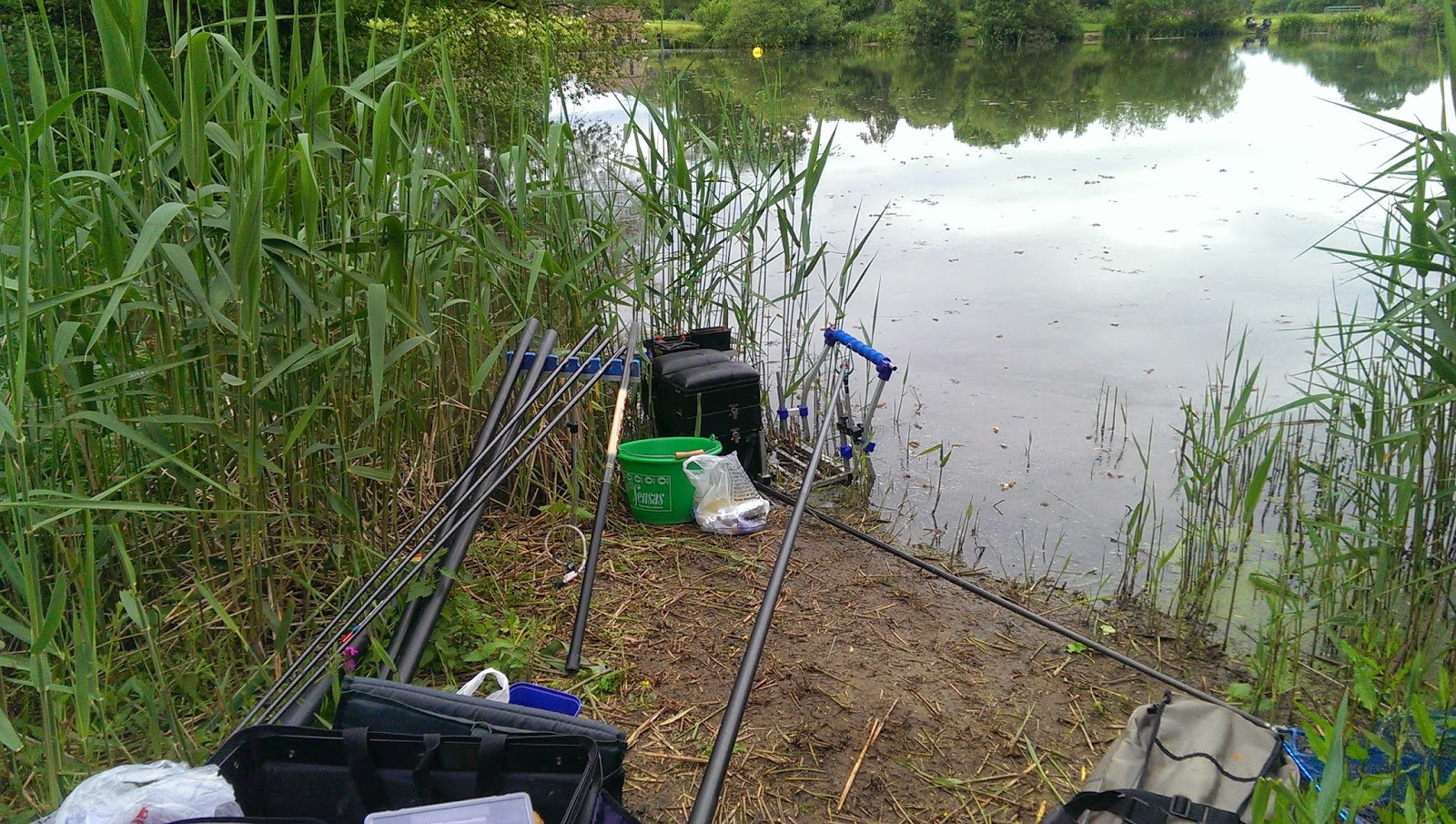 I have only fished this pond once before, I parked up under the oak tree and heaved my gear over the newly erected electric fence. After a fairly monumental effort of lugging all my gear to the peg, “Ned” (who I had met previously at Ilminster canal) started laughing and told me about the second car park. Well I felt like a sweaty mug, and after dumping my gear I quickly nipped back to the car and moved it so now I was a lot closer to my peg. Fishing the peg was going to be difficult, I aimed to tough it out for the bigger fish, so it was more than likely going to be a win or lose session. The peg itself (which isn’t strictly a peg) is a silt bank, there is another about 10 feet out into the water which people fish off using a platform (as I would find out later). There was a lot of bamboo growth so shipping out would be at 90 degrees, and involve dropping the bait in past the newest bamboo shoots. I had to position my box and footplate half in the water, half on the silt to get at my chosen fishing spot. Still, I was up for a challenge, and set my box up so I could start fishing. I found the shelf that I would be baiting and set my rig at 2 inches over depth. There were fish topping all over the place, so if it all went belly up I could pick off a few silvers, to make sure I didn’t blank! 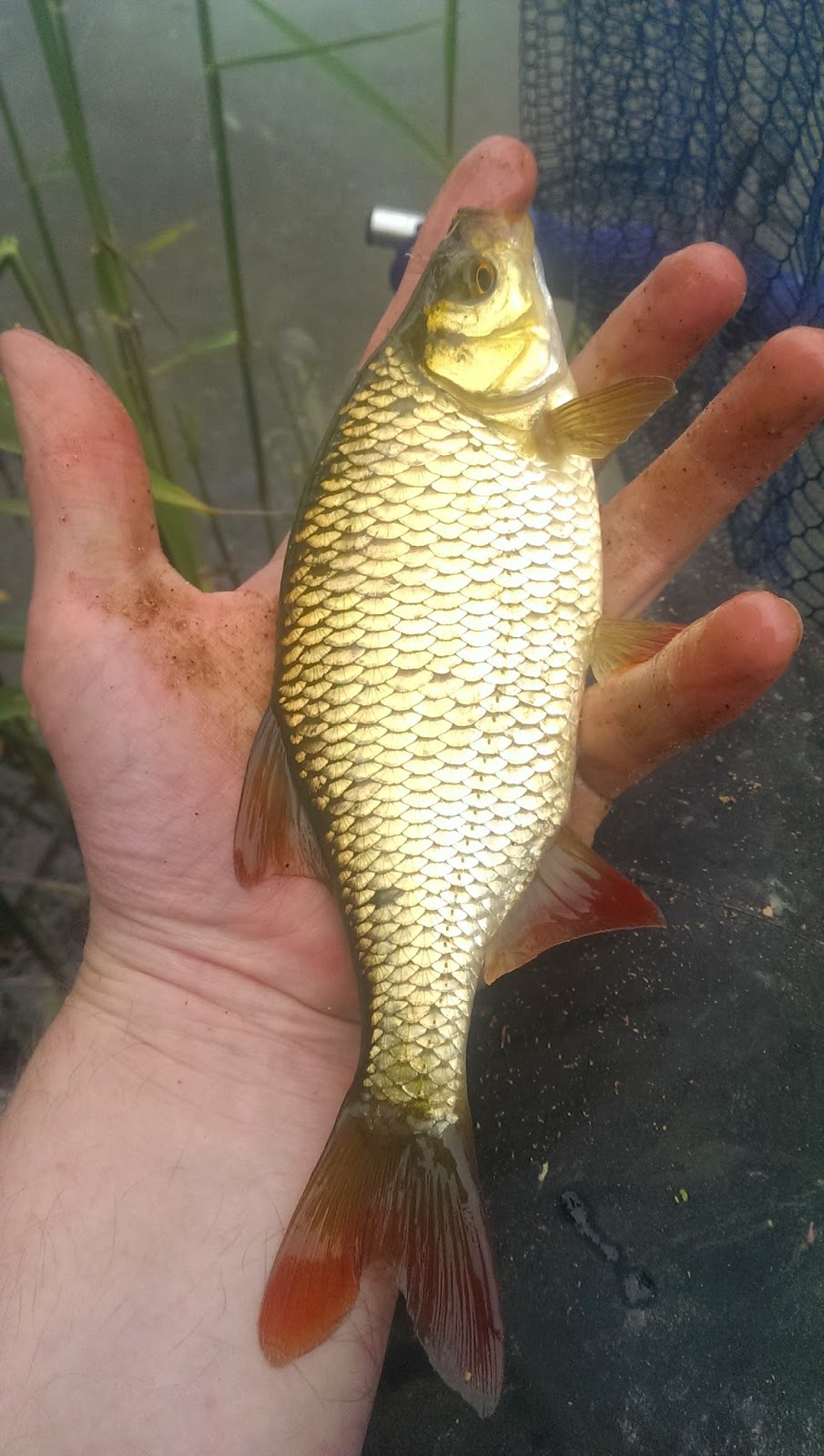 Dropping in 2 balls of Bait Tech Pro Natural and shipping out with corn on the hook, I sat and began the waiting game. The bites were fairly quick, but were very timid, and nothing committed to taking the float under. My second attempt was using double caster, and I brought to the bank a small but great condition Rudd. Next I tried 2 dead maggots, this caught a Perch, and live double red maggot caught a Roach. 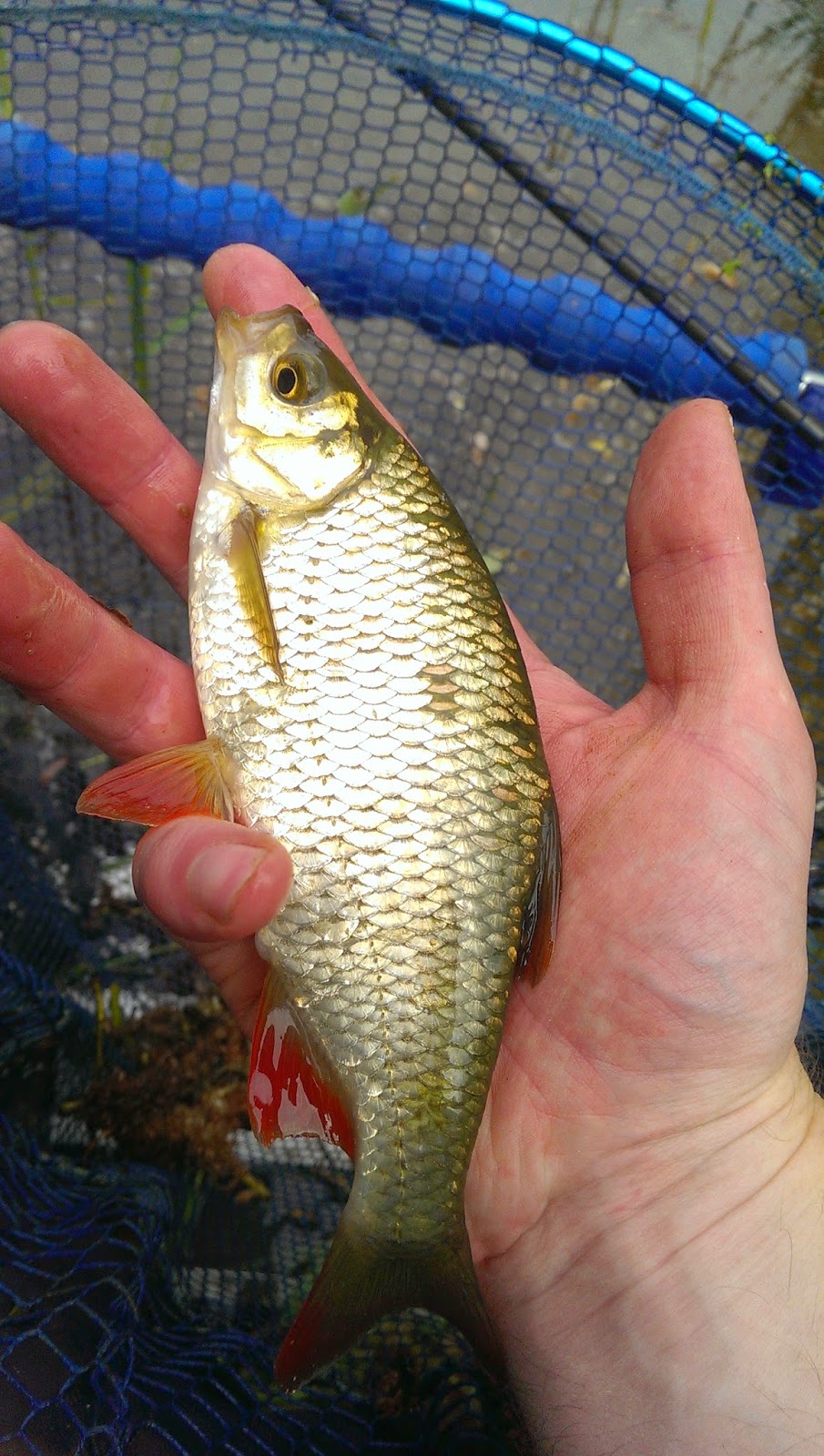 I switched it back up to corn and again, despite the line bites, nothing committed to taking the bait! This was frustrating. I switched to banded 6mm pellet and sat it out for another 15 minutes without the sign of a full bite. 8mm Halibut pellet, didn’t even get a bite! So I switched back to casters, and within a few minutes the float slunk under. It was a Perch and slightly bigger than the last. I caught intermittently on the bottom for the best of 2 hours, when in the absence of the bigger fish, I thought I would target some of the fish up near the surface. 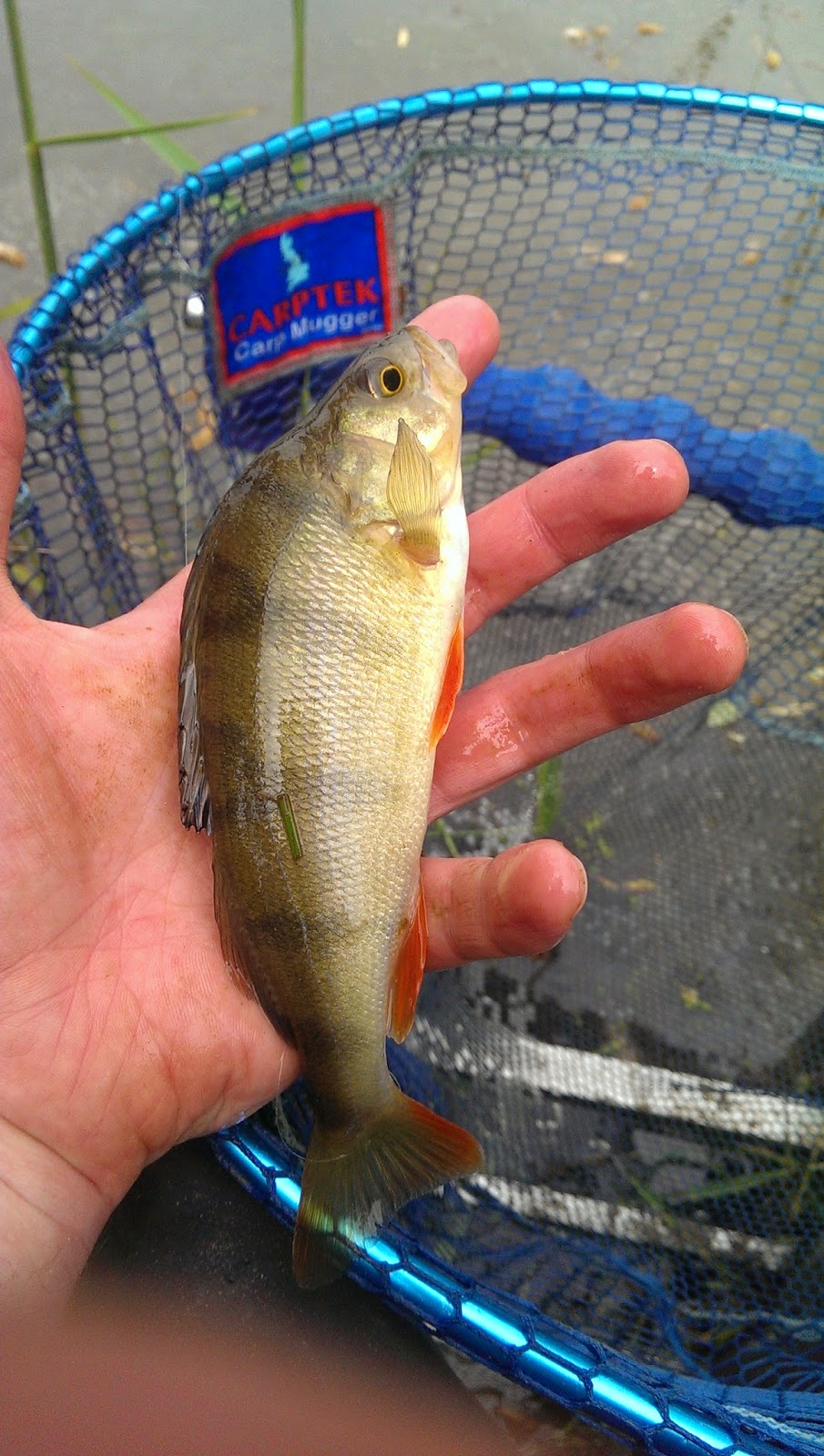 I set up a short, light rig, at which point Scott (who had been fishing the pump house swim), walked over. I can only describe my hour fishing on the surface as a total nightmare. Speaking to Scott, I saw he had had a busy day with a bag of silver fish up around 15lb+. He also gave me a bit of advice on fishing my peg, after watching me tangle my rig and fishing like absolute plonker for 5 minutes he headed to his van. I can only assure you Scott, I am not that much of a pleb when fishing (usually…). Throughout the afternoon surface scum had slowly moved into my swim (and my entire section of bank), and with it were floating furry seeds. This made shipping out quite difficult, and I would often end up hooking one of these seed pods and waste time unhooking it. Eventually I got my act together and managed to pick off a few fish that were feeding just under the surface. I dropped another ball of groundbait into my initial swim, and gave it 15 minutes before fishing over the top of it, in the mean time I was happy catching some fin perfect Roach and Rudd.
Changing top kits and rigs I shipped back out towards the willow, at this point a club member (Robin) wandered over. He asked me how I was doing and told me that the bamboo needed to be cut back (which was due to happen soon), it was usually a lot easier to access the peg. He then went on to tell me that he usually fishes on a platform out on a silt bank about 10 feet to my left. It would certainly make accessing the swim a lot easier, but I didn’t have my waders or a platform. We started talking about the club matches and he said the last match (fished the previous day) was won with a solid 17lb of silver fish, and would I be interested in fishing any of the matches in the future (as I am yet to make up my mind, maybe next season)? The Ilminster club it quite small, and everyone who fishes seems to know everyone else, so I imagine fishing a match could be quite good banter. After a few more minutes Robin said goodbye and I continued for another hour or so, catching the odd silver fish and perch, but sadly nothing more sizeable turned up.
I decided to call it a day around half 4, and after packing up the majority of my gear, I pulled my box free from the silt and wheeled my may back to the car. In hindsight I should have fished on the actual peg and fished the feeder. The peg is well known for producing Chub, Perch and Bream so on my next visit to the water I will probably try this tactic. Either way, despite the difficult session, Dillington Pond is a great venue, and one I would truly recommend joining Ilminster Angling club for.
As a rating – See Dillington Pond.
As a side note, the peg I fished has no disabled access.
Share