Continuing from my previous river session a few weeks ago, for all intents and purposes this session was “The decision maker”. After a small but brief spell of success on the river I decided this weekend would be the weekend that I would take my father and brother to fish the river. We arrived at the swim I had previously fished with the hope of catching some chub, roach, dace and minnows! The river was slightly discoloured from the rain earlier in the week but it was running at its usual depth. We set 4 rods up between us, “The Lunker” (as my brother would say) was a heavy feeder rod baited up with a lump of worms and cast downstream close to the edge of some over hanging trees. This would remain out and try and tempt an elusive big chub out the deep!

Then between us we set up 2 stick float rods and a light feeder rod. Choosing a stick float for myself I cast out using 3 maggots to a location where I had caught fish before. Watching the float bob its way downstream it quickly made its way to the very end of the pool and I was just about to retrieve and cast again when the float disappeared! Striking I felt that affirmative thump of the fish kicking away under the surface and the rod was bent over. I think it was when I called “Yes!” to my brother that the line snapped! Winding in I saw the hooklink had snapped and I was furious! But filled with the hope and prospect of a day’s good fishing I re-tied my hook and cast back out. I would like to say that the day was eventful and filled with plenty of fish, but sadly it wasn’t! 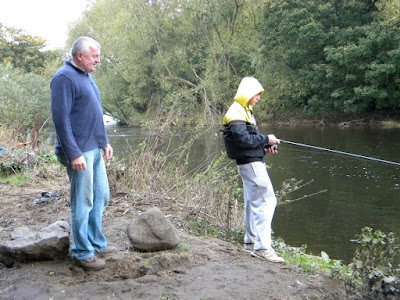 We sat on the bank for the best part of 3 hours and in which time my father lost a small chub at the net (again the line snapped, it made me question my hooklink, so I’ll be testing WB Clarke match line shortly), and my brother and I had taken to catching minnows and even those were in short supply! Although excellently presented in big fish photo fashion.

Trips like this are particularly demoralising because the people you are with don’t catch fish. What is more disappointing is that my earlier sessions to the same location had yielded encouraging results, however after visit as well as previous experiences of the river I had now made up my mind about fishing the River Aire.

It is a difficult place to triumph and 1 good day may be followed by 10 bad ones. It is also not somewhere I would choose to fish and write about again (unless it redeemed itself and passed up a specimen Chub). In the summer months if minnow catching is what you enjoy then there are literally millions of them to be caught along with the prospect of something bigger. In the winter it is a real tough cookie of a venue to crack and as a rating I would now conclude

Accessability *** (Quite a walk from Redcote Lane)

Rain overnight meant that it was going to be difficult but I felt that I needed to provide some better fishing after the previous days disaster! We left early on Sunday morning making our way to the Leeds-Liverpool canal in search of roach, perch and everything in between. Knowing that my family were heading back to Wales later that day I was hoping for a few frenzied hours of fishing, but on arrival at the canal the murky brown water looked ominous. With only Maggots for hook bait and loose feed we baited our hooks and flicked them into the water. The hour and a half that followed was agonisingly slow with 2 bites between 3 of us and no fish at all. 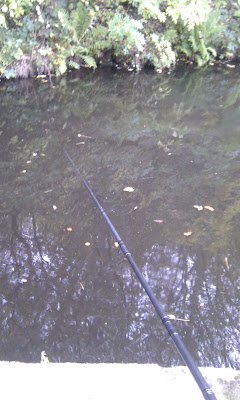 We covered a considerable stretch of water all fishing at different distances and depths to maximise the potential of catching fish, but in spite of that no fish came to the bank that morning. What was more frustrating was the fact that there were fish jumping and surfacing along the canal but they were not taking. The rumble of a canal boat through our swims meant that the murky water became filled with the silt churned up from the bottom and that drew to a close a fruitless and fishless morning. What made this trip worse was the fact I took them to locations where I had previously caught plenty of fish and was sure that they could provide some sport, but not this time. I think the canal will be confined to predatory practice for the coming months; being assured that it is full of pike and specimen perch. The only consolation that morning was the free McDonalds breakfast. Thanks Dad!
As a rating for coarse fishing in October I would say:
Accessability *** ½