The day is fast approaching… The 15th of March, and being a borderline workaholic I wasn’t going to be able to get a week day off to get out and give the river a proper bash. To be honest I haven’t been able to get out much at all this season, my last trip was a very short and frosty morning spent on  lake very near to my house. Unfortunately I think they may have few resident mink which have wonderfully unraveled all of the great stocking work that had been carried out in the previous summer and the hour or 2 my brother and I spent there was a complete blank! So the week leading up to this weekend was spent religiously checking the EA river levels website. Despite a squirt of rain earlier in the week, the river level was running a lovely and consistent 0.73m. Ideal (Although where I intended to fish would be a fair bit deeper than that). I had decided to get out and away early, and one of the advantages of having a baby is that lay ins are seldom. Sure as the sea, at half 3 we were up and feeding him, and I endeavored to leave the house at 5 and be back for 9(ish).
Well I did doze for another hour, fortunately the car was packed, so after a cup of coffee and quickly scoffing breakfast me, my father in law and the dog hopped into the car and we were off, eventually leaving the house at 6. It had been such a long time since I’d made this trip several checks of the sat nav were required along the route. One thing was for certain, it was flipping foggy the entire way!

Driving over the river at Law Lane we pulled over to check out the water clarity. There was a little bit of colour on, but otherwise it looked ideal. We got back in the car and made our way to my chosen stretch and on parking up it was clear that we weren’t the first people to arrive with pike in mind. It’s about 3/4 of a  mile walk to my chosen peg so I packed light. But very near my chosen peg we encountered 2 anglers (the dog encountered them first, much to their surprise) who looked like they were equipped to take part in tactical espionage rather than a spot of pike fishing. One of the guys was using the biggest and brightest spinnerbaits I had ever seen and the other despite the fog was top to toe in incredibly camouflaged clothing. They moved off as we walked passed and no more anglers were seen all morning.
I love spinning for Pike, it’s so quick, there’s very little fuss, and you are fishing in no time. I hooked up a dead Roach, elasticated it to the trace and began casting around. It was quite quiet, so I set myself targets of moving every 15 – 20 minutes. Minute 17 and BOOM! I was in. I looked up around for Jeff who was bringing me the landing net, and started singing the old “Total Fishing” theme tune. Which we both found quite funny. I could see the fish was only lightly hooked, so I was relieved to get it in the net, especially as this was my first Pike of 2016 on the only session I was going to get before the river season closed.
I think the fish was around 6+ish pounds, Jeff said 4. I’ll stick with 6+. Either way a Jack, but a fish nonetheless. I unhooked the fish and got her back in the water. A few seconds later and a few tail kicks and the silhouette was disappearing back down into the murk. I decided to move down the river bank after that fish, so wound in and slid (the banks were incredibly slippery) my way down the bank about 40-50 yards. After rebaiting my trace, a celebratory coffee and telling Jeff he was a lucky charm I started fishing again. 10 minutes passed when I felt a slight pluck travel down the rod. I struck and was in again. The fight on this was much less, and within 5 seconds, whatever had the bait had spat it out. On winding in the top half of the Roach had been completely smashed and repairing was required.
A few more casts and I decided to move on. One of the reasons was because I was slowly sinking into silty mud which was easily over ankle depth. I moved down the bank another 30-40 yards and began casting around. Then last 30 minutes was spent watching some fish in the margins being spooked by the dog when he stood to close to the water. I am fortunate that he doesn’t like diving in the water and was content to sprint up and down the banking like a lunatic. 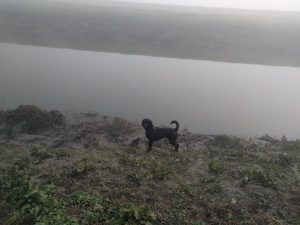 I’d fished for an hour and was starting to get hungry and cold, so rather than move on, and knowing that I this was always going to be a short session (coupled with the fact that watching me cast must have been incredibly boring for Jeff), meant I knocked it on the head and headed back to the car. An hour fished resulted in 1 pike caught, 1 pike lost. Not bad when I consider that haven’t done any Pike work since a similar time last year. It does however mean, I know where the fish are likely to be, and that’s something I intend to remember for next season. The River Isle seems to have a very substantial head of Jack sized Pike which is promising. I also hope to revisit the venue again in the summer for some chub as the river also has a solid head of coarse fish. But until then I’ll have to content myself with a few lakes and maybe a few sea sessions (although it’s still too cold to go for Bass… So roll on April/May).
Share