It’s amazing how catching a few fish after a long break gives you the bug again and after the catching bream from Hendre and the improvements I was showing whilst taking my medicinal cocktail, it was time the get the Pole out of hibernation. This would be a test, but I would finally know if my grip, strength and dexterity were up to challenge of a few hours shipping in and out on this action packed little fishery.

Considering it is now the start of the summer holidays I was very surprised to see only a small number of anglers on the bank. But I couldn’t complain, as my favourite peg was clear, in fact the entire bank was. So I set my gear up and after some adjustments with a fiddly footplate and spray bar I was plumbing the depth of my swim in no time. As the water level was down I decided to fish 2 lines, one at 10 o’clock at 7 meters and one at 2 o’clock at 9.5 meters. Both these lines would be on “shelf” as I was hoping to target some of Tench that the lake held.
It was clear that it was going by a busy day. There were fish topping everywhere, and the huge shoal of gudgeon in the shallows at my feet seemed intent on jumping into my landing net. 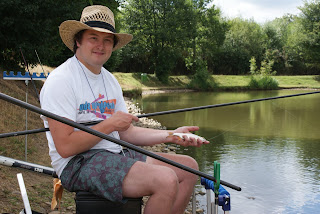 This was one of the rare occasions where I would not be using the “old faithful” maggots to start fishing. Today I would start by using corn whilst feeding 4mm hard pellets. Shipping out to 7.5 meters the float barely had time to cock before it sailed under. A fin perfect roach of a few ounces. The fish were taking on the drop, and they were taking everything. Corn, pellet paste, meat and worm, nothing would get through these fish. Increasing the feed rate only drove the fish higher up in the water and before long before my swim selections were positively boiling with fish feeding off the surface. I lost count after 40 silver fish, but every single roach I landed was in perfect condition. It would have been very easy and entertaining to catch these silver fish all day and you could easily put together a very sizeable bag of fish in very little time.
Feeding fast sink pellets created a commotion on the surface and it wasn’t long before large silhouettes could be seen cruising through my swims gobbling up any loose offerings. Enthused by my catch rate of silver fish I decided to up the ante and fish directly out in front at 9.5 meter using drilled dog biscuits on the surface. Firing out a few pouches of mixers it wasn’t long before the tell tale “slurp” of carp feeding on the surface became music to my ears. Switching up to my 14 elastic I shipped out and began to wait. The beauty of surface fishing on the pole is you can place your bait on top of feeding fish. Unlike using rod and line you can strike the take much quicker, and providing you have faith in your knots and elastic you will generally have a higher catch rate. 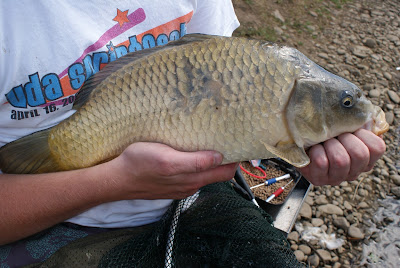 30 seconds past when a cavernous mouth appeared behind my hooked offerings. Instantly my elastic rocketed from my pole and I was in. This was a workout, (but totally worth it) and after an arm wrenching 5 minutes I managed to get the fish into the net. Firing another pouch of dog biscuits to keep my swim active was my next order of business, but the feeding carp were in no way perturbed by the thrashing fish I had just pulled through my swim. My first Carp of 2013 was a mirrored very low double (but would have been considerably larger before the recent spawning period). 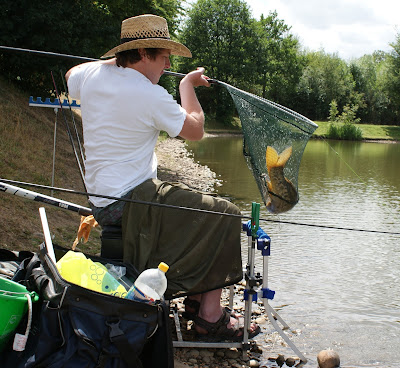 Shipping back out again with dog biscuits I sat on my pole and again began feeding the swim. Minutes had past when without even realising the elastic in my pole buried under the water. Although this wasn’t as big as the previous fish it still fought right to the bank, and even tried to flip out of my net while I was unhooking the fish in my lap! These fish were turbo-charged. 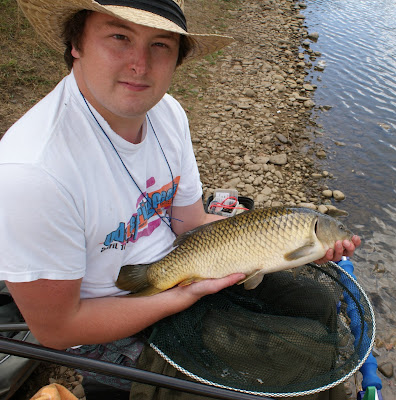 I was still being pestered by the smaller fish, which were not shy about taking large baits on large hooks. Alternating feed between fast sink pellets and floating dog biscuits meant the small fish chased the sinkers while the carp stayed firmly on the surface where I could pick them off. The last 2 fish I had caught had slightly disturbed my swim and the larger carp seemed to be holding off at around 11.5 meters. Time to add an extension to my pole. Using a spray bar means that fishing and feeding at distances up to 14.5 meters is easily manageable, now it just depended on my aim with my new catapult.
The fish were still in a feeding frenzy and as long as the bait was going in the water, the fish were not going to stop coming to the bank. In 2 hours of surface fishing I had 8 carp. 3 of which were low doubles and the other ranging from 3lb to 8lbs. I didn’t see fin nor scale of a Tench, but was in no way disappointed with my fantastic sessions fishing. If I had intended on fishing the surface from the beginning it would have been easy to catch well over 100lb’s of carp, but if I had sat on the silver fish all day and had maggots in my bait arsenal a solid 50lb bag of silver fish would also be easily achievable.

Following a Mr Crabtree discussion about coarse fishing being “dead on its feet”, I would implore anyone considering taking up fishing in South Wales to give this fishery a go. Although some of the banks are steep in areas, it is quite comfortable with picnic benches throughout, and fish can be caught from all positions around the lakes. Suitable for any level of angler, Riverside is a great fishery which offers enough space to try any style of fishing whether it be Pole, Rod and line or Fly. It would be very difficult not to guarantee a great days sport. That coupled with the lodge where bait, bits and food can be bought, this fishery almost has everything. The only thing I can suggest is a better driving surface around the lake (our wheel nearly disappeared into a pot hole on our trip around the lake!). That being said, it is very rare to be able to park next to your peg on fisheries these days which is added advantage especially for disabled anglers.

As a rating I would say;
Fishability  ****
Accessability ****
Value for Money **** (£6)
Disabled Access **** (No wooden pegs to speak of, but there are large flat expanses where you can pretty much fish from your car!)
Share