Recently a few friends of mine have been venturing further afield in search of specimens or bountiful river sessions. But as yet I have been unable to join them. So when I had a phone call from one of my angling friends recently, to see if I wanted to join him for a few hours in the evening on a day ticketed stretch of the great river Wye I positively jumped at the chance – Especially after he had confirmed that the stretch we would be fishing contains an enormous amount of Barbel (a species which I have yet to catch from a river). My friend being an avid (and secretive) river angler was quite wary about my writing up this report, so adhering to his rules I can’t mention the exact peg we fished. But the day tickets for the stretch can be bought from the local tourism office (and online).

Arriving at the river I was a little bit apprehensive. River fishing is frankly hardcore in comparison to lake fishing, and anglers would think nothing of clambering down a bank and into a dug out peg, or even into the river itself in order to get the best position. Although I am on the mend, I am nowhere near “fighting fit”, and did not fancy an impromptu plop in the drink, especially on my first visit. Fortunately there was a well walked path alongside the river, and the “clamber down” was a series of dugout permanent steps with a few excellently positioned trees, which meant I was bank side and comfortable in no time. The river had some colour in it from the previous weekend’s rain, but had dropped significantly. By all accounts the river looked perfect.
I would be fishing a large cage feeder with a 2 foot hooklength, using hair rigged pellets, as would my angling amigo. The Wye is a large and powerful river and my initial 3 ounce feeder was quickly washed downstream without touching the bottom (amateur mistake)… Time to bring out the big guns. 5 ounces should do the trick, and picking my spot I cast out, set the “bow” and began the waiting game.
To quickly explain, the “bow” method is very similar to “uptiding”. You cast out and, unlike conventional feeder fishing, you do not wind in when the feeder hits the bottom. You allow you feeder to hit the bottom, easing line off the spool (enough to create a bow in the line), turn your bail arm back over to its regular position, set your rod down and wait. The water pressure on the “bow” creates a curve in the rod tip, so the bites will either be registered as a drop back (the rod straightening), or more typically of Barbel bites, the rod being pulled right over with a series of aggressive knocks. Striking is also slightly different in that you have to wind down onto the feeder before striking, otherwise you will only strike slack line, therefore missing the fish. Ok, fishing lesson over. I cast out, set the bow and waited.
I was advised “Do not be lazy!” and “fish for bites, so recast every 5/7 minutes”. Rightio, after 4 casts into my swim my friend hooked into his first Barbel of the trip. A lovely fish of just over 3lbs. The recent rain meant the fish was a beaut, and a lovely copper colour. That was quick, hopefully it would soon be my turn. My rod started registering the pluck of a bite, so I re-cast and hoped the extra feed would bring them on a bit. As I sat my rod down the tip lurched over and I could feel the steady beat of the fish’s tail hammering away under the surface. 3 winds of the reel and the fish was off! Gutted!
I cast out again, hoping to catch something else that may be lurking in my swim. But both of our swims had now gone quiet. 30 minutes and numerous recasts happened before my rod belted over! I wound down and connected! This time I was in, and it wasn’t coming off. I had never caught a river Barbel, but this thing was going like a train, and quite happily stripping line off my baitrunner. Bringing the fish to the bank was an effort, but I was over the moon to see the fish in the net. A Barbel of around 4lbs, not a massive fish, but one I was very happy with. I released the fish, and recast in the same location hoping for something extra. 5 minutes had past when my rod hammered over again! 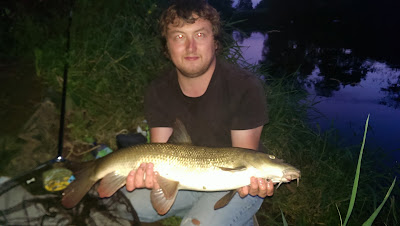 This time the fish decided it wanted to go up stream and powered off. In the mean time, my friend hooked up too! Double hook up! In all honestly, the fight was tiring. I actually had arm ache afterwards, but it was totally worth it.
Once I had beaten it, I had in my net a lovely fish of over 8lbs. A great fish, and a great fight. My friend had landed and released his 5lb Chub in the time that I had spent battling this bugger! I was ecstatic.
There was a pro-longed quiet spell between fish then, it seemed as though the fish were feeding in episodes. 30 minutes later my friend had another fish, of over 9lb, which provided great sport. Time seemed to evaporate after that, and it wasn’t long before we were both into final cast territory (the day ticket only permits fishing an hour after sunset).
My friend had another fish just over 4lbs, and in the excitement of getting a bite on my last cast I forgot the “wind down to connect” rule of fishing the bow and totally missed my last opportunity!
Still I couldn’t complain as this was one of the most enjoyable 4 hour fishing sessions I had had in a while! Fishing a river is unlike fishing any lake, natural or commercial. Everything is more challenging and it is not hard to see why many anglers prefer the surety of catching fish from lakes. Still, I am 100% definitely going to fish the Wye again. It was excellent fun and parking the car so close to the peg was an added plus!
For my first visit, and a rating I would say;
Fishability **** (Looked fishy, was fishy)
Accessability *** (Although there was a well walked path, there were roots, bushes and nettles you had to look out for, oh and the river itself, there are no platforms)
Value for Money *** Depending which section you fish (£7 – £10) (More expensive than the lakes in South Wales, but it does offer something that they don’t, a real challenge)
Disabled Access ** (No wheelchair access, and a bit of jungle warfare may be required to access the more exciting pegs. Although I have been told (and seen) people fishing off the steps near the road bridge in Monmouth, where there is a tarmaced cycle path)
Share