I was walking along the Cobb at Lyme Regis with the wife recently and I was pleasantly surprised to see a lot of people fishing. There were a few guys spinning and even more people using standard bait fishing tactics. Although I didn’t see any fish coming out, the beach definitely looked inviting to any potential sea anglers. On the walk back to the car with a wet and muddy dog, I noticed a chap walking past with the Tackle Box logo on the back of his hoodie. With a quick Google I found that the shop was only a few meters away! With that in mind, it would be rude not to call in and have a look around. I will say, not being local to Lyme Regis, I did rely quite heavily on Google and for the first time it let me down! The location wasn’t where I was expecting, but after a quick ask around, I found out it was only a further 100 or so meters down the road. So we grabbed the dog and headed down the alleyway to the shop to see what they had on offer. 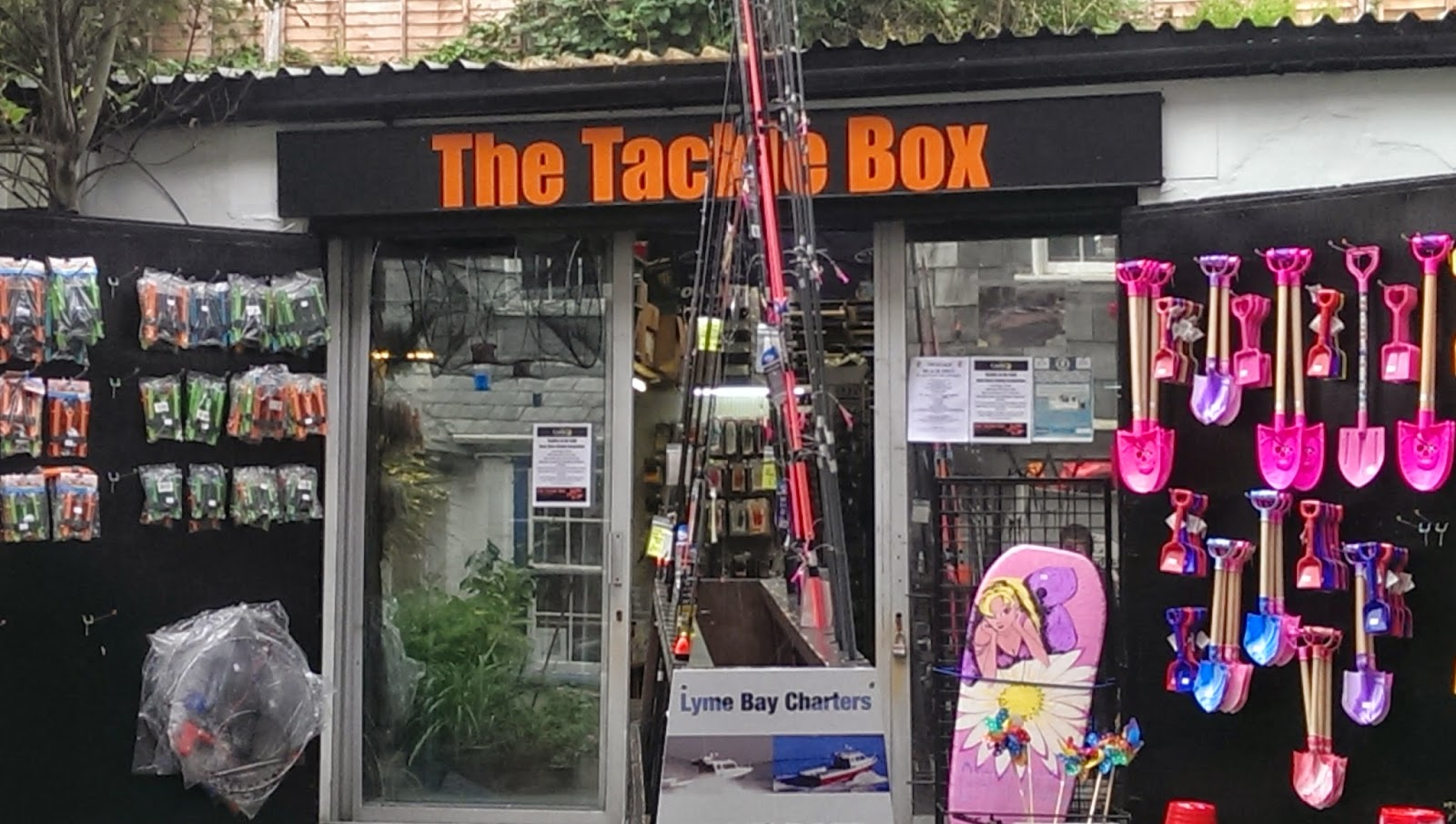 Being so close to sea I was expecting a heavy sea fishing presence and from the off I was not disappointed. I had already emailed the shop earlier in the week and asked if the sold any fresh coarse fishing baits. The short answer was no. They generally only stocked maggots and casters from April to the end of August, and this was the final weekend of August. Also being in such close proximity to the sea and with generally clear water, there is a heavy focus on lure fishing, which has absolutely exploded with popularity in the last 18 months both in salt and fresh water. From the outside of the store I had to chuckle and the array of brightly coloured shovels and spades, the wake boards and crab lines (there were a number of people crabbing off the Cobb, it was clear where they bought their gear from).
Entering the store, it was a hive of activity, which was nice to see and every staff member was busy talking about what had been caught and what was going to do well in the evenings match. Entering and walking to the left there were a few fly lines and leaders, which were opposite several bait fridges. Beyond these and on the immediate back wall was a selection of coarse fishing bits, floats, weights and various hooks, going down to size 18/20. There are also several sizes of Pike floats (which I suppose can be doubled up and used in salt water), along with a few traces and trebles. Underneath these where some shelf life boilies and on the opposite shelves a selection of Power Baits and some other groundbaits. 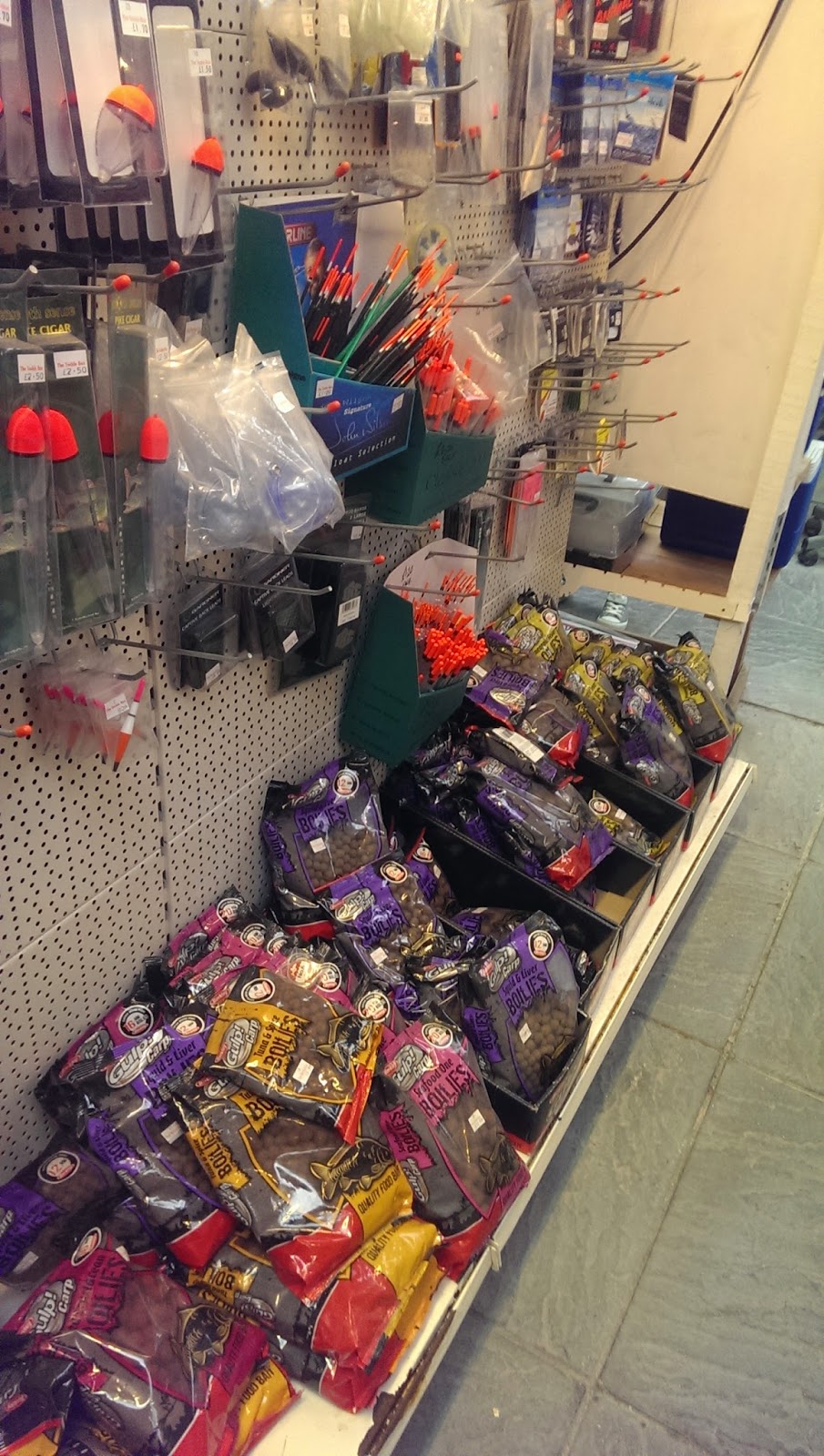 To the right of these and into the main area of the store there is a double sided rack of rods. The side closest to the door seemed to hold beachcasters and some boat rods, with the racking facing the back wall holding what looked like spinning rods and a few coarse rods. But what really grabs your attention is the back wall which is absolutely slammed full of lures/plugs/spinners/shads/red gills and weighted hook heads for some of the smaller jigs. Almost every make conceivable was on display and it was clear to see that the focus in the area is definitely on spinning and lure fishing. 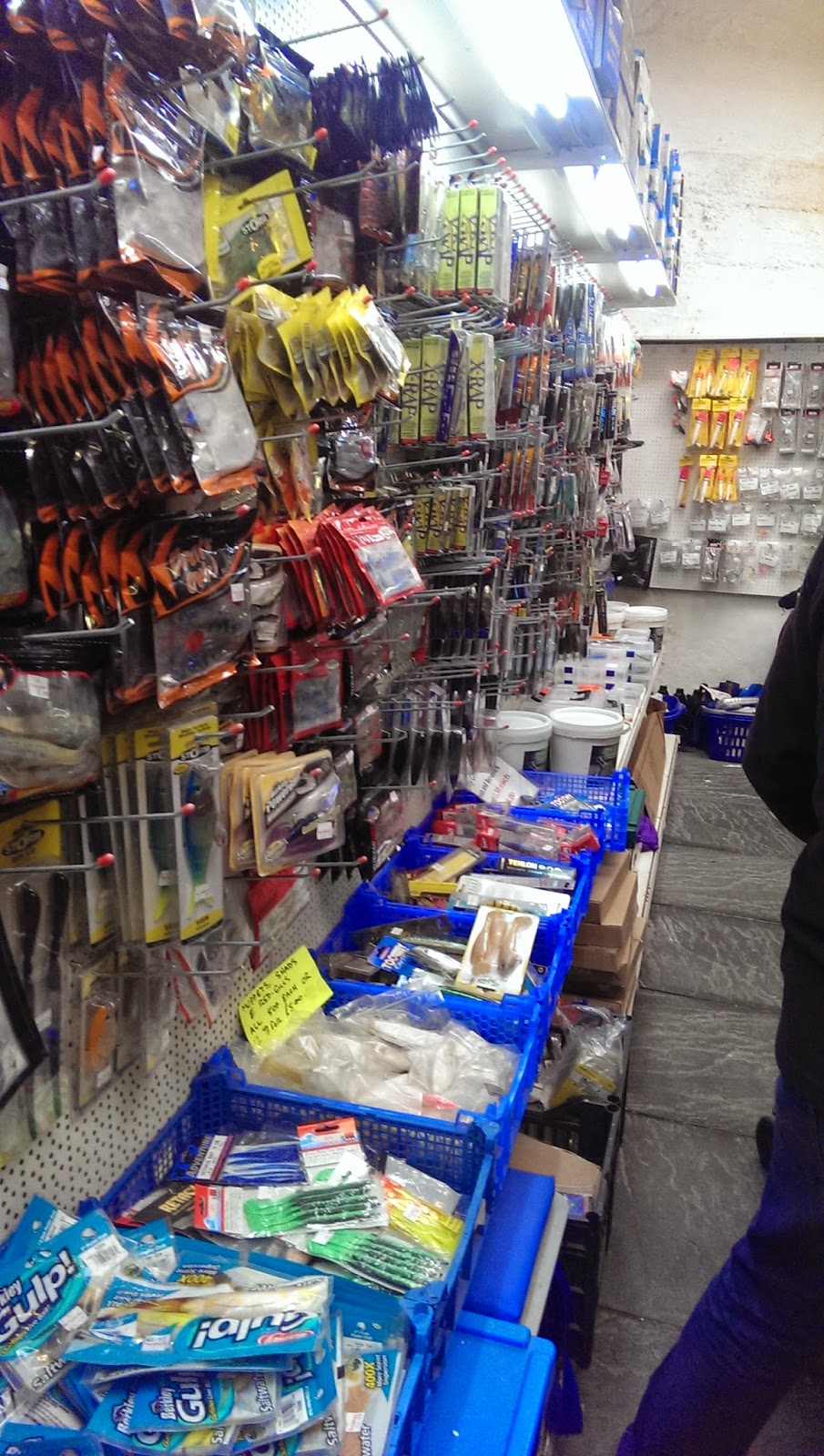 Under the lures there are tackle boxes, in both large (Shakespeare seatboxes) and small sizes (lure/bits boxes), and on the far wall there are some standard sea fishing floats and various bits that accompany them. I had a quick glance at the rods, and would have liked to have had a play around but the shop was that busy I didn’t manage to get any further, and as there were people rooting around actually intend on buying things rather than just having a look, I thought I should leave and make a bit more room. I assume that the Tackle box sells fresh sea fishing bait from the boxes I saw in the fridges, but never managed to ask the question. There were a few locals in a fairly serious conversation about what baits were catching in preparation for tonight’s match, it seemed as though a fair few people were heading out to wet a line!
Another thing I like about the Tackle Box is the activity and response that is encountered on their Facebook page. They actively use social media to promote their upcoming matches and results, as well advertising the local catch report from boats fishing out of Lyme Regis harbour. At the time of writing this (September 2nd) there are still hundreds of Mackerel being caught from the shore and Bream are being caught in large numbers from the boats. As far as a tackle shop goes there is the bare minimum of coarse fishing equipment at the Tackle Box, but then again, being so close to the sea, it’s a wonder that they had any at all! You could easily stock up your float or hook collection, without looking to hard. But this shop comes into its own for sea fishing equipment and more specifically lure fishing. I will be sure to visit again with my Brother and Father in toe when they next visit as they are both very keen sea anglers, and will probably leave the shop with their wallets emptied and their tackle boxes full!
As a rating as an all round tackle store I would give – ***.
But if it’s sea fishing you are after, especially with all the local knowledge that they obviously have at the place it is an easy ****.
The Tackle Box is somewhere I would definitely recommend having a look at if you’re into your sea fishing, you’ll probably end up picking up a bargain and a lure or 3!
Share