After getting some advice on how best to fish the River Aire, I resolved this weekend to put some of that advice into practice. Visiting Iceland early on Saturday morning to buy some thin frying steak which needed to be chopped into bite sized pieces (I had been assured that this caught fish), as well as replenishing my luncheon meat stock. I then went to spy my swim, which I intended to feeder fish. I had 2 swims in mind after my river side strole, starting in the first swim by casting towards to opposite bank into the slow moving and deeper water and then if it was necessary moving to fish behind a tree which had grown up through the middle of the river. It was looking positively fishy! 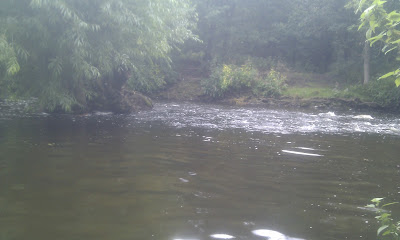 When I arrived I positioned myself (after a rather precarious walk) onto a rocky outcrop in the middle of the river. Casting to my right with a slither of steak on the hook, the waiting game had begun. 2 feet away from me I could see a shoal of minnows easily 100 strong, and I thought it wouldn’t be long until my quiver tip whipped around with a fish on. After 15 minutes I decided to check my bait. The hook was bare! Casting back out with a new offering I kept a close eye on the tip of my rod this time eagerly awaiting a little nibble. Another 15 minutes followed and I wound in again, the hook was bare! This time I recast with 3 dendrobaenas and a red maggot. After 5 minutes I saw an affirmative knock register on the tip. I wound in and this time it was a minnow about 1 ½ inches long!

After that I tried cheese, bread and luncheon meat but, nothing seemed to tempt these evasive chub.

Another 2 hours followed after which I decided to move swims. Walking along an old stone path along the river bank takes you to a peg which allows you to fish directly behind the willow tree I mentioned earlier. I hopped down onto the small section of the bank after the path ended and set myself up as quickly and quietly as possible. 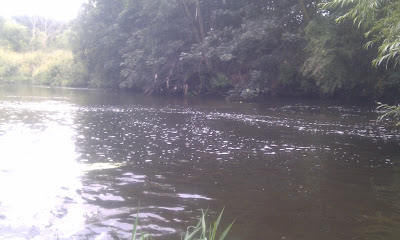 A gentle under arm lob landed me in the deeper slower moving water, just beyond the over-hanging branches of the tree. I adjusted my line so that there was the smallest of curves in the tip, and hoped that the cheese I had on the hook looked tempting. The rod bent over rapidly but perhaps I should have left it a little longer because I struck I didn’t connect. In fact, I struck so hard that the swim feeder came tearing out of the swim at a rate of knots narrowly missing me! 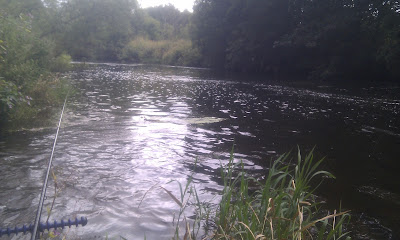 I reset my hook bait, this time offering meat and cast back out feeling rather foolish at striking so hard. After an hour and a half of switching baits and altering my casts position it was fairly obvious that I wasn’t going to catch anything. Thinking back to the advice I was given maybe it was too early to fish the river on these tactics for chub, it was from October/November onwards that he said the chub came on the feed and the minnows died off. Well, I didn’t catch any of those chub this time but I definitely will get one before the end of the year, the only question is when it will be, and what will tempt it!